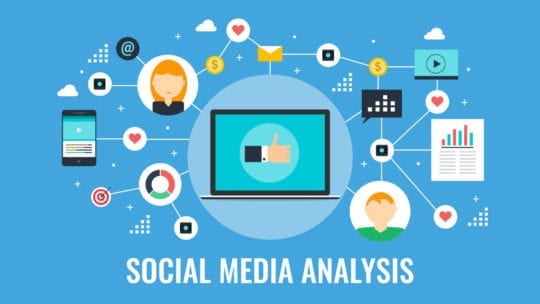 As readers of this publication know, we like to gauge the mood of the industry at frequent intervals. So after returning from The Social Shake-Up in May in Atlanta, we examined how communicators are assessing the bevy of data that social media generates.

To do this, PRNEWS developed a survey with InfoVision Social, the research and social media analytics arm of InfoVision, a company that delivers customized strategies and insights. Some 200 communicators took part in the survey, conducted last month.

Looking at chart one, you can see respondents were almost evenly divided as to their biggest challenges in analyzing social media data. Not surprisingly, measurement and finding the correct metrics led the pack at 33 percent. Following closely was handling the volume of data (19 percent), arriving at accurate or useful insights (20 percent) and integrating data from several channels into a single platform (21 percent).

Particularly insightful were write-in responses to this question. One respondent said, “Our problem is translating sales and ROI from social media efforts into something executives understand.” The challenge, another responded, “is tying social media data to revenue.”

Another respondent noted it’s hard figure out “what social media data means for our business.”

Yet another mentioned the age-old problem of “knowing what data to pull,” while yet another concurred and noted, “KPIs are changing all the time…we want [to track] all of them.”

The biggest issue for one respondent was “not understanding how to evaluate the data.” Several survey participants said “all the above”options on our chart were their biggest challenges.

We asked Rajesh Kari, VP/business leader at InfoVision Social, for his reaction to lingering issues with measurement and metrics. “We’ve seen a huge void and opportunity gap...in making sense of unstructured social data by deriving accurate and relevant metrics and measurement.” He added, “The foundation starts with data curation and integration for an effective outcome.” 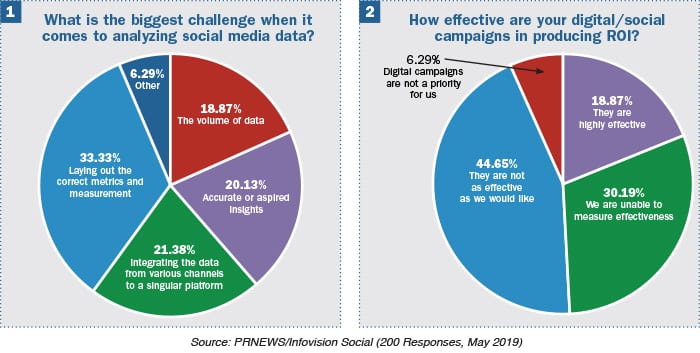 A related question is whether or not social and digital campaigns are effective in terms of ROI (see chart 2). Nearly half (45 percent) of those surveyed indicated that “They are not as effective as we would like.”

“Measuring social ROI is a complex process for many,” Kari said. A well-defined social outreach goal is key to campaign evaluation, he added. In addition, “a targeted campaign” with reliable data supporting it is crucial. 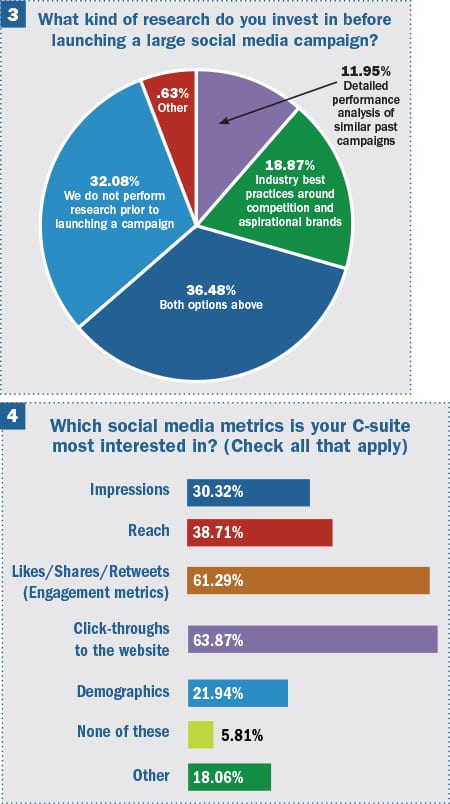 Additional cause for concern comes from the next chart (see chart 3), where 32 percent admit dispensing with research prior to launching a large campaign. This group seemingly is ignoring an accepted staple of PR.

Is it possible that foregoing research prior to campaigns is hurting ROI on the back end?

Some better news is that nearly 70 percent of those surveyed said they either conduct “detailed performance analysis of similar past campaigns” or look at “industry best practices” before embarking on a social media initiative.

One of the major questions as social media pushes further into traditional business practice is which social metrics are important to the C-suite. While many communicators continue to cite impressions as an important metric—30 percent of respondents said the C-suite is interested in impressions—(see chart 4) the majority of senior executives in this survey were more interested in figures connected to engagement (61 percent) and calls to action, such as click-throughs to the brand or organization’s site (64 percent).

With nearly 20 percent choosing “other,” the written answers are important. The preponderance of them concerned correlating social posts with “track-able transactions,” as one respondent wrote. These metrics included revenue, leads, employee recruitment, ROI and actions such as attending events, making donations, requesting additional information and watching corporate videos. 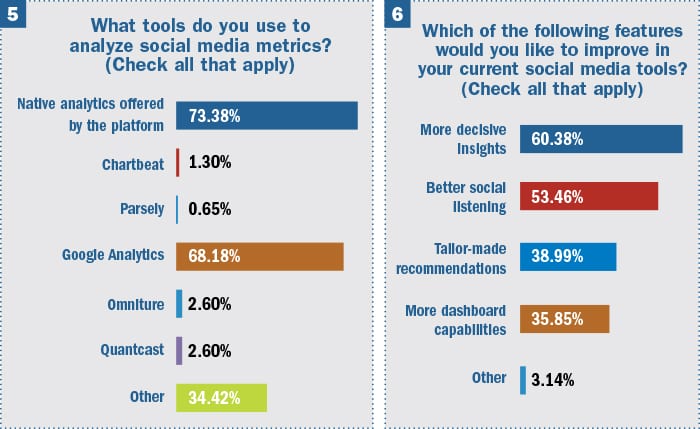 This wasn’t surprising. The vast number of communicators lack the resources necessary for costly or custom tools. Google Analytics is known as a very effective analytical tool.

In addition to those tools listed as options on our chart, 34 percent of write-ins included SproutSocial (35 percent) and Hootsuite (22 percent). There also were votes for Meltwater and Adobe (both at 3 percent), Falcon, Shareablee, Sprinklr, TrackMaven, SOCi, Agorapulse, Domo, Khoros, Later.com, Spredfast and CrowdTangle.

“Advanced metrics to measure qualitative KPIs is the need of the hour,” Kari said, “therefore a consultative approach to derive specific metrics for performance evaluation is suggested.”

Kari also stressed that “the underutilized audience segmentation & measurement is where marketers are missing the jackpot” (see chart 8 and coverage below). 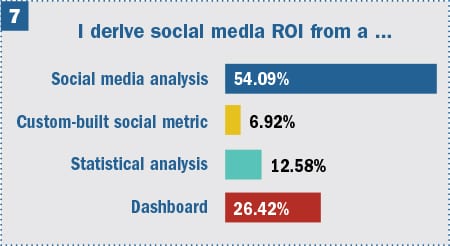 As to what characteristics users would like to see in tracking tools (see chart 6), it’s interesting that there wasn’t a larger desire for custom-made devices, though the 39 percent response indicates a clear market niche. Ditto the 36 percent who said they’d like to see a more extensive dashboard. The biggest segment wants more useful insights from tools (60 percent) and improvements in social listening (53 percent).

The first figure, about insights, reinforces a trend we saw in an earlier survey. In that survey, conducted late last year, PRNEWS and partner PublicRelay found senior leaders increasingly are asking PR to justify decisions with data (see PRNEWS, Nov. 2018).

Kari agreed that there’s an increasing demand for social data to generate “actionable insights.” For brands, he said, “It’s not just numbers and dashboards that elevate their understanding to the next level–it’s about making the right choices or insights-driven business decisions.”

The desire for better social listening in this new survey seems to indicate the importance of social listening for spotting trends, gaining insights and providing early warning on potential crises.

Tracking with the survey’s finding about the respondents’ lack of non-native tool use is chart 9. As you can see, the largest segment by far is the 69 percent who said they lack custom metrics.

Another result from the survey indicates a wide open swath for vendors and consultants supplying solutions and expertise around segmentation.

Chart 8 indicates nearly half of our respondents (44 percent) have yet to attempt audience segmentation. Just more than half (51 percent) said they either were having issues identifying segment profiles or found the vast amount of data available to be overwhelming.