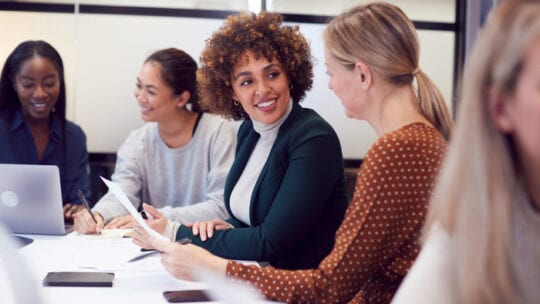 It’s no secret that women dominate PR jobs. The well-known data from the Bureau of Labor Statistics says the field is 60 percent female.

Yet the Biden-Harris administration made headlines when it named an all-female communication team late last year.
Making Progress
This past fall, Clorox named a female chief executive. With that, the Fortune 500 list broke its previous record; with 38 female CEOs, it surpassed the prior year’s record of 33.

Companies across the board are committing to gender diversity at a higher level. Last year, Goldman Sachs CEO David Solomon committed to diversity initiatives for clients of the investment bank. More recently, Nasdaq filed a proposal to require companies have at least two diverse directors, including one female.

McKinsey’s latest “Women in the Workplace 2020” report shows that from January 2015 to January 2020, women in the C-suite increased 4 percent–not a tremendous jump, but a step in the right direction.

In 2019, California enacted a law requiring at least one woman on the board of public companies based in the state. (At the end of last year, the state added a law requiring publicly traded companies headquartered there to have at least one member on the board from an underrepresented community.)
A Grinding Halt
Despite these examples of progress, the novel coronavirus upended many women’s career trajectories.