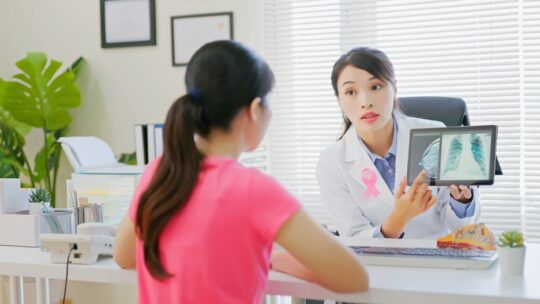 When her BRCA test (breast cancer gene) came back negative earlier this year, Zapp thought she was out of the woods. However, she found a lump near her armpit in July.

Zapp requested a mammogram, even though she was outside the suggested age range for the preventative screening (40). During the screening, an experienced radiologist told Zapp she was certain it was breast cancer.

Work then became a reality for Zapp. October, Breast Cancer Awareness Month and one of the busiest fundraising times for BCRF, now takes on a whole other meaning. Not only are research and appeals for funding important, so is messaging for breast cancer screening and diagnosis, especially for younger women.

“October is the month that the entire world is kind of focused on this one cause," she says. "And so, it really is a powerful moment to galvanize communities and have this collective action...there are so many brands calling attention to [breast cancer]." She adds, "The reason that's so important is because they drive movement.”

While this may sound like good news, it's not. The lower figures are due to a reverberating trend stemming from the pandemic. Based on data from 1.1 million patients, Quest found cancer diagnoses plummeted nearly 30% in the first months of the pandemic in 2020, when much of society and healthcare offices shut down.

While cancer diagnoses increased subsequently through 2021, gains were not enough to offset diagnoses delayed or missed earlier in the pandemic.

“This suggests more people are living with undiagnosed cancer than before the pandemic, with potential for worse outcomes and higher healthcare costs in the future,” says Kim Gorode, leader, Public Relations Center of Excellence, Quest Diagnostics.

The Power of Going Public

Revealing one’s diagnosis, particularly if that person is a celebrity or public figure, can raise awareness for cancer screening. Recently, Katie Couric spoke about her breast cancer diagnosis and treatment. She included information about radiation and her lumpectomy.

Couric also revealed she was six months late getting her annual mammogram.

“Please get your annual mammogram,” she wrote. “I shudder to think what might have happened if I had put it off longer. But just as importantly, please find out if you need additional screening.”

In 2013, actor Angelina Jolie went public about her preventative healthcare choice. In a New York Times op-ed, Jolie discussed having a double mastectomy after discovering she carried the BRCA1 gene. Her mother died of breast cancer, at 56.

Jolie’s essay included risk percentages for gene carriers, as well as details about the procedure and recovery.

Several medical journals researched the "Angelina Effect." In a 2016 study, the British Medical Journal (BRJ) found a 64% increase in testing rates in the 15 business days after The Times ran Jolie's story.

Not everyone commands the audience of Jolie or Couric, but coming forward can make a difference. Alexandria Whitaker Cheadle, an account supervisor at MBooth in her 20s, shared her story. Her goal was to show that everyone should advocate for their health, no matter their risk factors or background.

“I’ve heard from countless people...that hearing my story has changed how they monitor their health and advocate for better medical care,” she says. “Many people think that to get breast cancer you have to be older, have a genetic mutation, like BRCA, or be otherwise unhealthy—but I was a healthy 24-year-old who had no family history of breast cancer and never even had a reason to get a mammogram.”

Whitaker Cheadle took to social media after her diagnosis in part because she felt alone. Most medical information offered to her from doctors focused on older patients, not someone in their 20s, she says.

In social posts, she finds transparency and honesty most effective. In addition, she includes educational facts and information.

For public figures, she suggests they educate themselves thoroughly before sharing stories. In addition, she urges they align with organizations funding research.

“Sharing your story and generating awareness is great, but celebrities already have extensive reach, and therefore, the ability to make a big difference...,” she says.