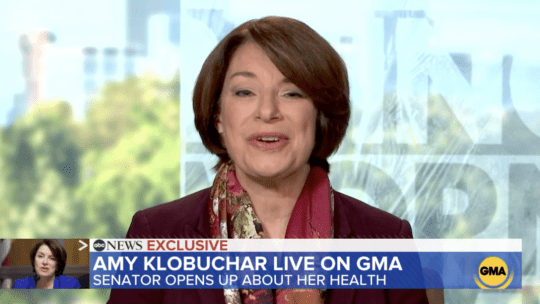 Word-of-mouth marketing is nothing new to the PR world. Reputation and perception of a business or person thrive on personal experiences and how those relate to the public.

Sen. Amy Klobuchar provided a great example of what word of mouth and personal messaging can do to promote breast cancer awareness after revealing her story today (Sept. 9). Published on Medium, her statement did not seek sympathy or concern, but displayed gratitude and encouraged action. She urged routine examinations, even amidst the pandemic.

“I...want to call attention to the fact that many people have been delaying physicals and routine examinations because of the pandemic,” Klobuchar wrote. “I know that because I delayed mine. In fact, more than one in three adults reported delaying or forgoing health care because of coronavirus-related concerns. Studies have found that thousands of people who missed their mammogram due to the pandemic may be living with undetected breast cancer. Over and over, doctors are seeing patients who are being treated for more serious conditions that could have been caught earlier.”

Research from the Journal of the American Medical Association (JAMA) in Aug. 2020 showed the number of breast cancer diagnoses declined by half. This suggests fewer patients visited health care providers for routine checkups during the COVID-19 pandemic.

Even though Breast Cancer Awareness Month is in several weeks, Sen. Klobuchar decided to release her message today. In addition to publishing her statement on Medium, she appeared on "Good Morning America" with host Robin Roberts, a fellow breast cancer survivor, to reach an even larger audience.

There's a burden on public figures who utilize their platform to reveal personal health stories. Doing so can have good and bad outcomes. Communicators' role in such situations is to guide celebrities to provide proper facts and avoid misinformation (a la Joe Rogan’s COVID testimony last week).

“[Klobuchar’s] messaging to encourage early detection, particularly at a moment when so many people have put off annual screenings because of the pandemic, is the perfect approach,” says Dini von Mueffling, founder and CEO, Dini von Mueffling Communications. “This is especially true around breast cancer, since in recent years there has been mixed messaging around how often women need to be screened for the disease.”

“It was enormously brave, and [Cross] could have easily decided 'not to go there,'" von Mueffling says. “Instead, she used the moment to raise awareness about HPV, which is the virus her husband had that caused her cancer.”

In addition, von Mueffling notes the importance of message delivery. Klobuchar’s statement was a nice balance of factual information and personal sentiment without seeming ungenuine.

“Any high-profile person considering messaging that aims to be helpful but doesn't feel forced should do something authentic and in line with their character, just as the senator did,” von Mueffling says. “She's a public servant, so her personal messaging of early detection was spot on. If the senator had done a high- production-value PSA, that would have felt off brand.”

And as always in these situations, one can hope the message has a real impact.

“One never knows how many lives are saved when a high-profile individual gets a disease and goes public with it to help others," von Mueffling says. "But ask any doctor and they will tell you that they receive an immediate influx of calls from their patients after.”