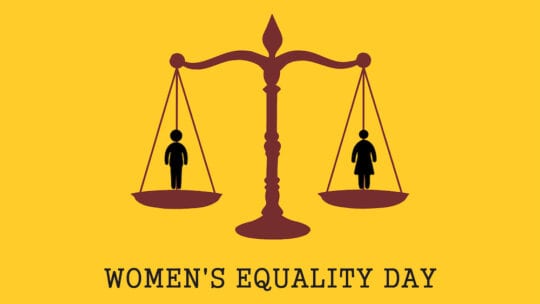 It is also the first statue of real women in the 160-year history of Central Park.

The @MonumentalWomen's "Women’s Rights Pioneers Monument" was unveiled in Central Park today. The monument commemorates the centennial of the ratification of the 19th Amendment, which gave women the right to vote. Learn more about its significance: https://t.co/lybY9u9S9J pic.twitter.com/z5bMt0c8Ow

The monument serves as a metaphor for many women on this 100th anniversary of the adoption of the 19th Amendment. It took years of work and sacrifice for women, albeit white women, to enter the voting booth.

The metaphor is not lost on women in PR.  Women hold 72.8% of PR jobs, yet representation in management and pay still lag behind their male colleagues, according to the Bureau of Labor Statistics.

While women in all industries still have a ways to go to reach full equity, brands are acknowledging and embracing the need for change. Below, we look at how organizations are honoring the day on social media.

Evoke KYNE and W20 Group shared videos celebrating the women in their workplaces.

Today on #WomensEqualityDay, we celebrate the incredible women of EK. Today and every day we celebrate the achievements of women around the world and around our workplace. pic.twitter.com/cPvJmifyoB

Last week was #WomensEqualityDay and the Women of W2O shared the significance of the day and called for continued, more inclusive, advancement. #WCW pic.twitter.com/jKwOr6cpex

Everyone from T-Mobile to Barbie showcased bold, creative, celebratory messaging.

Be bold. Take charge. Make history.#Barbie is committed to sharing the amazing stories of women who dared to break boundaries and change the world. We’re amplifying their accomplishments in effort to inspire every girl today to reach her full potential. #WomensEqualityDay pic.twitter.com/LV0Jr5dSEs

Today is #WomensEqualityDay! But we'd have a whole lot more to celebrate if women in the US didn't lose a combined total of almost $1 trillion every year due to the gender pay gap. Learn more: https://t.co/78B6BRfRfp pic.twitter.com/qsalWc1SPY

We’re proud to be the first global automotive company to sign the United Nation’s Women’s Empowerment Principles. And we won’t stop until we’re all equal. #WomensEqualityDay pic.twitter.com/W2b3JdaUko

This #WomensEqualityDay, let's remember to

While some, like Mary Kay Inc., founded by Mary Kay Ash in 1963 and now chaired by her son Richard Rogers, and 84 Lumber are household names, thousands of women choose to start small businesses to find their own success.

On #WomensEqualityDay we honor the 100th anniversary of the U.S. ratifying the #19thamendment giving women the right to vote. This is worth marking but our fight is far from over. According to the World Economic Forum it will take 99.5 years to have a gender equal world. #vote pic.twitter.com/ob64gA3RrP

Today we honor and celebrate the trailblazing women who have paved a way for Women’s Equality, as today marks 100 years of the right to vote for women. We are proud to be a woman-owned business in the construction industry and to be WBENC certified! #WomensEqualityDay pic.twitter.com/HyEcWoTdeq

Today is #WomensEqualityDay, commemorating the #19thAmendment, which granted women the right to vote 100 years ago. Watch @SBAJovita's message on the centennial of women's suffrage in the United States. #WomensVote100 pic.twitter.com/3fdhzl32AP

While most politicians broadcast messaging celebrating the day, organizations, such as the branches of the military, as well as NASA, shared their praise of female employees.

#WomensEqualityDay celebrated nationwide today commemorates the passage of the 19th Amendment of the U.S. Constitution in 1920, which granted women the right to vote. 100 Years later, commemorates a milestone of democracy and to examine the significance of equal rights today. pic.twitter.com/N5vUP51JJ8

Women at NASA help pave the way for us to learn more and explore further. On this #WomensEqualityDay, learn more about our workforce and follow @WomenNASA to keep up with our accomplishments: https://t.co/rHuC63Bm6T pic.twitter.com/CogKtb0upV

Join us at 3pm ET for a #WomensEqualityDay program to celebrate the "Past, Present and Future of Women in Space," reflecting on the stories and profound contributions of @WomenNASA. How to watch: https://t.co/uItA5mnxKY pic.twitter.com/xavXxNBNYJ

Sports, arts and the media also distributed messaging to grant a nod to ladies in their respective groups.

The sport of tennis has not always been equal for women.@BillieJeanKing and the Original 9 helped to change that. #WomensEqualityDay pic.twitter.com/a4cOL3VUS8

Happy 100th Anniversary of the Right To Vote For Women! Use your vote, it's your voice to keep our democracy strong! #suffrage100 #vote pic.twitter.com/FVi6gyCP0z