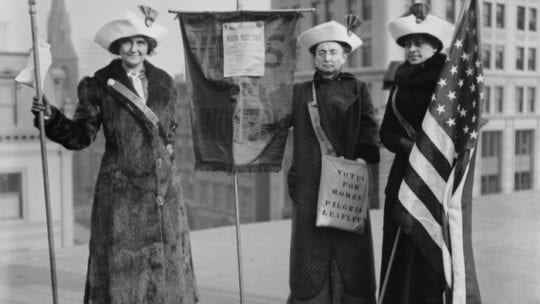 Transparency may be the day's watchword as brands celebrate the 100th anniversary of the 19th amendment's ratification and shudder at visions of the past. 100 years ago today, Tennessee became the 36th state to ratify the amendment. The act provided women in the US with the right to vote. Or so it seemed.

In truth, celebrating the amendment today, the wake of Black Lives Matter, almost forces transparency. Truth is that for years the 19th was a piece of paper without teeth for Black women. Black men too. As historian Martha S. Jones said in Time last week: "In the case of the 19th Amendment, even as it’s ratified in August of 1920, all Americans are aware that many African-American women will remain disenfranchised."

The 19th, she said, failed to "eliminate the state laws that operated to keep Black Americans from the polls via poll taxes and literacy tests—nor did the 19th Amendment address violence or lynching." Jones adds the 19th's passage actually hurt suffrage since organizations that pioneered the movement began to disband.

In addition, some of the storied figures of the suffrage movement were not progressive on race.

Today's NY Times illustrates authenticity. Often seen today as liberal-leaning brand, the paper dug into its archive to expose its views about women voting. In short, some men didn't want to share the vote with women. "And there were many who dismissed the cause as ridiculous, if not downright dangerous," the Times' Jennifer Harlan writes.

She quotes a 1913 editorial from the paper: “The benefits of woman suffrage are almost wholly imaginary. Thus far, where women have voted, they have brought no societal or political change...Whether or not the woman voter will neglect her home duties will depend upon her character."

Elsewhere in today's edition, the 1913 editorial board is quoted: “The New York Times does not believe that the achievement of woman suffrage will increase either the happiness or the prosperity of women in America.”

Two years failed to change the board's mind. In 1915, it wrote, “Without the counsel and guidance of men, no woman ever ruled a state wisely and well.”

Oh, the irony. A woman runs the paper's editorial pages today. Kathleen Kingsbury recently took over for James Bennet, who resigned in June over the publication of Sen. Tom Cotton's essay.

As acting editorial page editor, Kingsbury writes today: "As a woman now running our editorial page, I am not proud of all of my predecessors’ views. But I want to confront rather than paper over the times when our page has stood on the wrong side of a fight. By acknowledging our past failings, we can set a new course for our future."

Perhaps McDonald's suing its former leader promises more authenticity moving forward. It's less clear that authenticity reigns at The Ellen Show, where three executive producers are gone. Ellen DeGeneres, the symbolic head of the show, keeps her job. The jury is out in both situations.