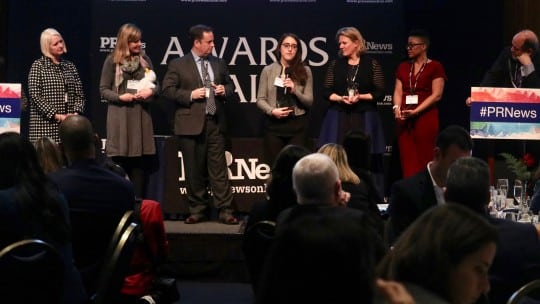 The winners of PR News' CSR Awards & Nonprofit Awards span a wide variety of organizations, from brands like Food Lion, WWE, Honeywell, Disney and Aflac to agencies such as Porter Novelli, FleishmanHillard, The TASC Group and the Kroger Group and nonprofits like CompTIA, the American Academy of Pediatrics, United Way and Children's Miracle Network Hospitals. The winners were judged on the impact of the communications campaigns they've led in the last 18 months and on the positive influence they've had on society at large.

Attendees heard a keynote presentation from Bob Filbin, chief data scientist at Crisis Text Line, who spoke about how you can better use data to drive involvement, action, funding and media interest for nonprofits and social responsibility programs.

Filbin has been a pioneer in turning data into action through analysis and storytelling. Crisis Text Line has processed over 63 million messages to date from people in crisis, winning accolades from the mental health community and the millions it has helped nationwide. It is the largest organization for people to resolve crisis through text, having completed 11,831 active rescues from suicide attempts and other life-threatening situations.

Most crisis centers and organizations treat queues in terms of chronology. Instead, Crisis text line evaluates each case based on severity, then prioritizes its responses in kind. Most organizations also think about solving problems in terms of people, policy, product. Crisis Text Line thinks about things in the opposite way—product, policy people. This lets them reach more texters while focusing on quality.

"We service the backend, allowing us to be a scalable solution not just for us, but for other organizations dealing with crisis," Filbin said. "This allows us to be better for our texters, and better for the data. We have one place where all the crises are coming in, and we can see how they all relate."

At the March 20 luncheon in D.C., the CSR Award and Nonprofit Award winners inspired their peers with their accomplishments as well as their thoughts on the campaigns that have shaped their perspectives on advocacy and social responsibility.

Asked what communications tactic made the biggest difference in her program, Rebecca Shapiro of Intrepid Travel, which won the CSR Award in the blog category, said it all comes back to collaboration. "In the travel industry, we're lucky enough to have local tour guides," she said. "In our content marketing, we just talk to them. When you actually have locals on the ground in hundreds of countries, that content is much more authentic and meaningful."

Keith Dailey of The Kroger Company recalled his biggest "AHA!" moment upon accepting the CSR Award for Environmental Stewardship, for Kroger's Zero Hunger │ Zero Waste campaign. "We realized that many companies address hunger, and many companies address zero waste, but we could be the company that uniquely addresses the nexus between hunger and waste," he said.

Larry Kopp, president of the TASC Group, said that the launch of the Heather Heyer Foundation, for which he accepted Nonprofit Awards in the Event PR and PR on a Shoestring Budget categories, was among his proudest moments. "After the incident where they lost their daughter in Charlottesville, we were able to launch their foundation in 10 days," Kopp said. "Susan Bro has since become a national figure at fighting racism and white nationalism around the country."

Alexandra Frank, who accepted the Nonprofit Award in the Blog category on behalf of Counterpart International's Building Better Lives in Guatemala campaign, explained how small teams can be successful. "It's really not about the big budget production," she said, "it's about telling people's stories and creating that meaningful connection, even if it comes from a great quote and a cell phone picture."

See all the winners and honorable mentions for PR News' 2018 CSR Awards and Nonprofit PR Awards.