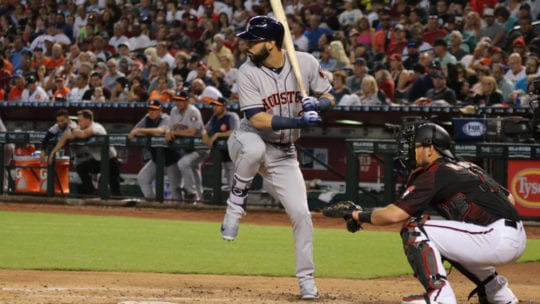 Once again, Major League Baseball finds itself entangled in the details of a cheating scandal. Unlike the steroids era of the 1990s, where Congress held MLB accountable, we now find the sport policing itself, taking its teams to task.

In Nov. 2019, The Athletic reported an ex-player's account of the Houston Astros using a video camera during the 2017 season. The player, Mike Fiers, said the camera recorded and helped steal other teams' signs—manual signals between players on the field to strategize actionable plays.

In response to an internal investigation, MLB imposed year-long suspensions of the Astros’ manager and general manager Monday. The Astros’ owner took one more step, firing both men in an attempt to regain trust.

On first glance, MLB's quick action seems like the right thing to do, PR-wise, to scotch a larger crisis. It's right to suspend those who break rules. But does the punishment make a real impact on the game's relationships with fans, or even tell them the full story? Similarly, there are several questions left unanswered and a newly imposed gag rule, which rarely makes for good PR.

For example, MLB's investigation exonerated Jim Crane, the Astros' majority owner/chairman. Many are questioning this. "Crane won...he got his championship. He keeps his team. His fine is" minimal. "The sport lost, but Crane won," Jeff Passan wrote for ESPN.com, quoting an ownership source. The punishment, the source added, seemed designed to protect Crane and his investment.

There are several complicating factors. The Astros won the World Series in 2017. MLB's investigation shows the team cheated during the Series. As such, the report taints the championship. In addition, the Dodgers, the opposing team in the Series, is furious [more below].

Alex Cora, who now manages the Boston Red Sox, but was a coach with the Astros in 2017, is at the center of this incident and a second MLB cheating investigation. That investigation covers the 2018 season, when the Red Sox, under Cora, won...wait for it, the World Series. There already are calls for Boston to fire Cora, who appears to be headed toward at least a year-long suspension.

Boston Globe sports writer Dan Shaughnessy sounds like a PR pro in his column today. He urges the Sox to get in front of the story. For the sake of the team's reputation and "dignity," he writes, oust Cora now, before MLB finishes its investigation of the Sox.

Red Sox need to do the right thing and fire Alex Cora https://t.co/eRmA9Hw4uy via @BostonGlobe

Arthur Solomon, a former sports journalist, also was an SVP/senior counselor at Burson-Marsteller. Solomon played key roles in managing some of the most significant national and international sports marketing and non-sports programs.

“Their first responsibility is to make money," he says. As such, they attempt to cover up scandals. Leaks to the media or government revelations are the only ways damaging things such as scandals go public, he adds.

Solomon believes a big reputation mistake is that MLB is keeping too much in-house.

“I think the commissioner's action doesn’t seem like a complete solution to the problem,” he says. “When any business investigates itself, there always is a suspicion of the entire truth not being told. Baseball is investigating itself—its own staff." What's happened reminds Solomon of similar PR crises where too many people were spared. "Top management must be fingered,” he says.

Another wildcard is Carlos Beltrán, a member of the 2017 Astros. He is the sole player mentioned in MLB’s nine-page report about cheating. It’s a short mention. Beltrán “discussed that the team could improve on decoding opposing teams’ signs and communicating signs to the batter,” it says. MLB did not discipline Beltrán, now retired. So far, at least.

The report, though, notes, “It is difficult to [discipline players] because virtually all of the Astros’ players had some involvement or knowledge of the scheme….” The report acknowledges it’s impossible to know the degree to which each player was involved. In addition, many of the players no longer play for the Astros.

A Hall of Fame-caliber player, Beltrán’s situation is sticky. In November, he became manager of the NY Mets. During a press conference announcing the hiring, Beltrán was asked about the Astros’ cheating scandal. The first-time manager made a PR error. He denied knowledge of cheating.

One of the PR takeaways here, of course, is never lie to the press. Similarly, avoid saying anything to the media you can’t prove.

Though PR law usually argues against the “no comment” response, Beltrán would have been better off using it. He’d have been justified, too. The commissioner’s investigation was ongoing at the time he responded. 'I can’t comment about an ongoing investigation' would have been a much better response than lying, which is what Beltrán did.

Now the Mets, whose ownership prides itself on following rules, face a dilemma. Should the club jettison Beltrán, or allow a tainted individual to lead it? The Mets' antiquated PR approach is to say almost nothing to the press unless absolutely necessary. As expected, the team has said nothing.

In this case, though, MLB has given the team some cover, as you'll see in the next paragraph. At the very least, the Mets should get Beltrán media training. The NY sports press is known for devouring the inexperienced.

Moments after releasing its internal investigation, MLB placed a gag order on teams commenting on the cheating scandal. In response, the Dodgers issued a non-statement statement a bit after midnight today.

The cheating scandal seems to be reverberating through baseball. Not a surprise considering teams are not allowed to comment. So what are teams like the Mets, Dodgers and Red Sox, forced into the crosshairs, to do? Solomon provides several best practices.

“[First], I would re-investigate the entire thing with outside investigators." In addition, he'd release all evidence and transcripts to media that illustrate MLB's decision. “[Next], I would hold a lengthy press conference with the commissioner and team owners. No holds barred.”

In other words, the truth just may set Major League Baseball free.