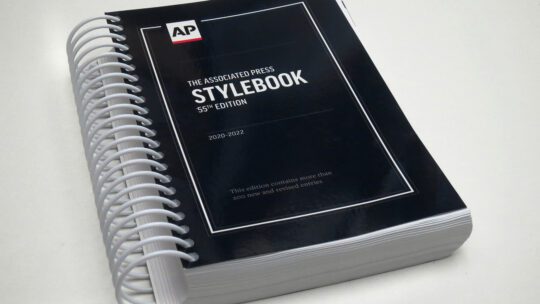 [Editor’s Note: One of the most popular articles on prnewsonline.com is a review and summary of AP style. We took that as a sign and decided to deliver a series of AP style updates for newsworthy topics. Previously, the series looked at terms for writing about cryptocurrency and diversity, equity and inclusion (DEI), among other topics.]

For this installment, we explore financial and economic terms. An extensive list is found at the Associated Press Stylebook online directory, under Financial Market Topical Guide.

Use these terms when mentioning the market indicator most professional investors use when assessing stock performance. It encompasses 500 top companies in leading US industries. Use Standard & Poor's 500 index on first reference, S&P 500 on subsequent references.

This fund is diversified across economic sectors. It tracks the Standard & Poor's 500 index with low annual turnover and low tracking error.

It is expected that during a bear market nearly all stocks will decline.

A period of generally rising stock prices, often defined as a 20% or larger increase in broad stock indexes, such as the S&P 500.

The 1920s brought the great bull market in which the value and quantity of stocks traded soared.

Use a hyphen in all e- words except email and esports.

In the context of finance, this term refers to when a stock, bond, commodity or index declines 10 percent from a recent peak. Corrections are common during bull markets, and are considered normal and even healthy.

During the record 11-year bull market that started in March 2009, the S&P 500 had five corrections, the last of which happened in late 2018.

As chairman of the House Banking Committee, she framed and passed the Federal Reserve Bank Law. In this position she contributed largely to the new Fed system.

A common measure of economic growth, reflecting the total value of goods and services produced in a country. Economists often refer to the GDP. Spell it on first reference and define it in stories for clarity.

The share of agriculture in gross domestic product in these countries is 30%. It accounts for one-seventh of the GDP.

Use the % sign when paired with a numeral, with no space, in most cases.

In casual uses, employ words rather than figures and numbers

She said he has a zero percent chance of winning.

Be careful not to confuse percent with percentage point. A change from 10% to 13% is a rise of 3 percentage points. This is not equal to a 3% change; rather, it's a 30% increase.

Refers to the recession that began in December 2007 and became the longest and deepest since the Great Depression of the 1930s. It occurred after losses on subprime mortgages battered the US housing market and financial system.

Business further declined in the Great Recession that began in 2008.

This market indicator comprises 30 leading US stocks. S&P Dow Jones Indices LLC calculates and publishes the average. Always use the full name on first reference. On subsequent references, use the Dow. The Dow also is acceptable in summaries and headlines.

A major US stock index, often referred to in conjunction with the Dow Jones Industrial Average and the S&P 500 index. The Nasdaq composite is an index of all the stocks listed on the Nasdaq Stock Market. On second reference: the Nasdaq.