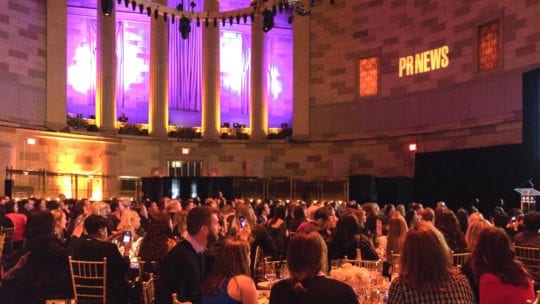 The overarching theme at this year’s Top Women in PR Awards rooted itself in the way professionals see themselves and how they treat others. Many winners noted that having it all is nothing if colleagues don’t have each other’s backs along the way.

The honorees gathered for a luncheon on Jan. 28 at the grand Gotham Hall in New York City, originally built for Greenwich Savings Bank in 1924. Much like the evolution of the building itself, which doesn't shy away from its historic features, the attendees at Top Women focused on the promise of the future, while paying respect to the past.

Judith Harrison, senior vice president, diversity & inclusion at Weber Shandwick, and current president of New York Women in Communications, delivered the keynote, discussing the benefits of diverse teams, the importance of leading with openness and encouragement, as well as reflecting on her personal career journey and how far women have come.

“When I started my career in marketing communications, women had to work their way out of the secretarial pool while men were hired as entry-level professionals,” Harrison said. “People of color were as rare as Bigfoot sightings.”

Harrison went on to describe the past reign of cultural masculinity, where just the suggestion of femininity was seen as weak.

“Sexual harassment was alive and well, but there were no words to describe it and no one to complain to,” she said. “For women, it was the cost of being in the workplace. There was only one leadership model back then, and it was male. In the world of advertising, Mad Men types with Don Draper swagger were idolized.”

Harrison pivoted to applaud modern campaigns for breaking through those traditional themes, such as Proctor & Gamble’s 2014 “Like a Girl” campaign, that showcased strength and female power. Attendees interrupted to graciously applaud P&G, also in attendance.

Harrison pointed out that while we are living in turbulent times of “political polarization and cultural disruption,” the world is changing, and that the time has come for leaders to embrace skills like emotional intelligence.

“So many people feel exhausted, isolated and alienated,” Harrison said. “Having the right kind of leadership in every corner of our lives has never been more important. Leading with strength, empathy and inclusivity is the only way to move the world around us from exhaustion, isolation and alienation to connection, optimism and resilience. It’s the only way to create the world we deserve, one that is better than it was when we got here and certainly better than it is now. It’s up to us to be the change we want to see.”

Award recipients delivered great advice and inspiration as well. From Nikki Festa, senior vice president at PAN Communications, who dedicated her award to her mother, who gave birth to Festa at 18, while homeless, and overcame adversity to raise her well, to Coleen King who described the emotional point at which she decided to start her own company. King told the crowd of the day she quit her job in broadcast media, after becoming fed up with the inappropriate comments of her boss. She went out, bought a sports car, and immediately received calls from her clients, asking her to help them with their communications needs.

Lissette Steel, founder and managing director of Verge Scientific Communications, reminded the room that “(women) shape the future of industries,” and Amandine Robin, senior vice president North America Communications and CSR at Pernod Ricard stated that “anything is possible.”

Dini von Mueffling, founder and chief executive officer of Dini von Mueffling Communications, described the importance of taking on pro-bono clients, as some of her best work came when working on the Sandy Hook Promise campaign for gun violence prevention.

And Catherine Mathis, chief communications officer at McGraw-Hill, stole the show when she recited a quote about what should go through a woman’s mind every day when they wake up: “Be the kind of woman that when your feet hit the ground in the morning, the devil says, 'Oh, s@##!'"