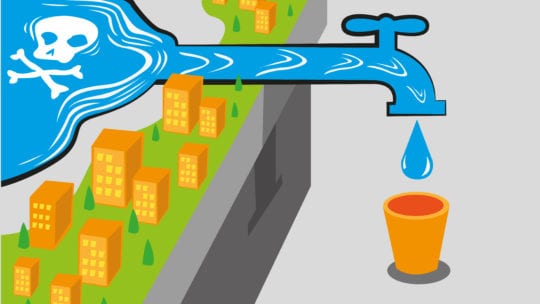 This weekend, The New York Times reported that the Environmental Protection Agency (EPA) told the city of Newark, NJ how to handle its own crisis. In a letter to the city, the EPA warned that the in-home water filters Newark distributed to combat lead contamination last October were not enough to protect residents. Following the EPA's advice, the city distributed bottled water to citizens in certain neighborhoods as a temporary solution.

More than 100 of the 240 water samples derived from the city of Newark this year contained federally unacceptable levels of lead, leaving impacted occupants of the city panicked for clean water. As families grow thirstier for an explanation behind the chaos, some believe legal action may be the only way to motivate local government and have set a suit in motion. "The Natural Resources Defense Council sued Newark and the state last year," wrote the Times, "accusing them of violating federal safe drinking water laws." The next court date is Thursday.

The Newark water crisis, like its sister tragedy in Flint, Michigan, has proven to be an insurmountable PR challenge for local government.

Reports of Newark's water contamination could have been made public in 2012, when the city’s treatment facilities adjusted PH levels to meet federal standards. The government won’t disclose crucial data on water quality that will affect the health of generations to come.

Since then, the 2012 chemical adjustment had an unforeseen impact on the corrosion of lead from pipes into the drinking water. Newark officials are shirking responsibility seven years later, as they continue to blame aging infrastructure and home foundations for the leaks. The EPA has now revealed that lead exposure is still present in Newark despite the desired goal of filter distribution.

Exposure from the EPA has emphasized the grave urgency of the matter, bringing to attention a lack of responsiveness from Newark officials. The local government’s role in facilitating federal and state communications makes connecting to the people impacted even more important during crisis. Had the local government opened honest communication channels and addressed the problem when it happened in 2012, they could have maintained message clarity for the entirety of the crisis.

The takeaway here is clear—if a regulatory body is giving you advice on how your organization should handle a crisis, you've waited too long. Think like regulators yourself, and self-regulate, lest you look unprepared and irresponsible.

Citizens found themselves clutching to government distributed water filters as their only hope for clean hydration, their knowledge of the future clouded by a veil of uncertainty. The physical disparity of lead-free water is an infrastructural flaw that cannot be fixed until the contaminated lines are replaced.

Communicators should take this story as a cautionary tale. Until the central root of an issue is resolved and we translate that process honestly, small bandages won't heal the deep, systematic wounds in your organization.

Control the narrative before it controls you

The Natural Resources Defense Council filed a lawsuit against the city of Newark, sparking hope for over 500,000 people impacted by the Pequannock and Wanaque treatment facilities. Now, with recent announcements from the EPA warning against its water, the city of Newark is learning about the crisis from an outside source. While ongoing strife between politics and policy continues to have an unjust impact on the way officials handle this situation, the city should have been the first to contact its residents about the inadequacy of its filters.

Furthermore, Newark's communicative disconnect could have been mended through the power of personal testimonials. Prioritizing message clarity through each step of the process can be used to harness storytelling into an effective PR tool for communicating public health.