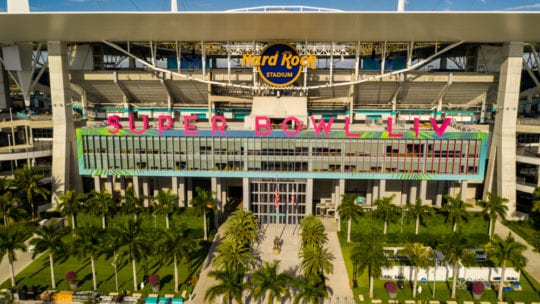 Each year the NFL credentials more than 5,000 media members for what may be the biggest game in sports, the Super Bowl. Radio Row fills with broadcasters and podcasters, setting the stage for what can be the week's trending stories. With almost 100 million pairs of eyes on the big game annually, according to Nielsen, the Super Bowl provides a smorgasbord of opportunities for PR professionals.

For PR pros, such a large, global, impactful event can be intimidating. And whether it’s their fifteenth or first visit, no Super Bowl is quite the same, bringing a hum of unmatched energy and non-stop activity.

For communicators, the Super Bowl is a career benchmark. The game can make or break a brand, as well as bring out the best (or worst) in communicators. Work hours are long, but the payoffs can be great. What can PR veterans of the big game tell us about how to handle what seems to be a larger-than-life media event?

Bill Hofheimer, senior director of communications at ESPN, has worked 19 Super Bowls. He first experienced the media mayhem in Tampa in 2001, and missed only one since. His initial Super Bowl was with Disney Sports, before joining ESPN in 2005. He's now PR lead for ESPN’s Monday Night Football and NFL studio shows.

It never gets old for Hofheimer; he seems to love every minute.

“Super Bowl is both exciting and exhausting,” he said. “It’s a lot of long days, but this is a one-of-a-kind event that’s a thrill to work. I try to never take it for granted.”

The Super Bowl is a great time to learn from teams one may not work alongside on a daily basis. Gathering in a neutral space while working toward the same goal brings out fresh ideas and synergies that might not occur when pairing up remotely. In addition to those opportunities, the Super Bowl provides one of the greatest spaces to build relationships with appropriate media.

“Attending events like Super Bowl Opening Night and walking Radio Row...are great networking opportunities,” Hofheimer said. “I often meet media members I pitch over email or phone during the year. But here it's face-to-face, which is so important in relationship building."

And no matter whom you work for, whether it's ESPN or a small, organic peanut butter company, Hofheimer said it can be difficult to break through the noise. As a result, planning and strategy are key.

“The key is to find the most impactful coverage opportunities and focus on those things,” he said. “It is (important) for PR pros to develop a strategy and arrange meetings and pitches in advance—try to lock in whatever you can before arriving in town. Once the Super Bowl starts, it’s like jumping on a treadmill.”

For Kate DiCarlo, senior communications manager at Olay, “Like a Girl” has become more than an advertising slogan. It’s opened up the conversation to include an entire genre of media attention, focusing on women as NFL consumers.

This is DiCarlo’s fifth Super Bowl, after working on three with Old Spice and another with Olay. She is leading the #MakeSpaceForWomen campaign in Miami, ushering actress Busy Philipps, YouTube influencer Lilly Singh, and media juggernaut Katie Couric through press interviews and appearances.

DiCarlo said the Super Bowl is fast-paced yet orchestrated. Radio Row may be a massive media machine, but she finds it runs incredibly smoothly.

“Everyone is here to bring the news of Super Bowl into homes across the country. So we are able to get 3-5 interviews in, every hour,” DiCarlo said. “It requires the ability to move fast, support your talent, and navigate the sea of lights, cameras and fans looking for a once-in-a-lifetime pic with their favorite celebrity.”

DiCarlo comes to the Super Bowl with a down-to-Earth approach: Treat talent as you would any other person, and wear comfortable shoes.

“Take a deep breath, soak in the experience and remember that everyone you see is a person, just like you,” she said. “I’ve shared blueberry pancakes with a well-known wide receiver, played mindless green room games with a famous quarterback, and watched Lilly Singh win a game of Connect 4 while doing a press interview.”

And don't forget the importance of sucking up your introversion and going for it.

“There will never be another place with so many press opportunities,” she said. “You’ll need to be outgoing to seize opportunistic interviews, and also be able to say no when the schedule does not permit.”

And when those press opportunities come up, know your stuff to make it easier on journalists.

“Know the top two to three simple facts [about your campaign] that you can share with anyone on the spot,” she said.

Therese Van Ryne, global director, PR, thought leadership and advocacy for Zebra Technologies, promotes a computerized tag in the shoulder pads of NFL players. The tag can determine the speed of players, how far they run, and more. The tracking technology is also used in other industries like health care, manufacturing and logistics.

Even for someone promoting a niche product, the Super Bowl is a “lightning rod” for media coverage, Van Ryne said.

Though Zebra had several activations planned, Van Ryne noted the importance of being flexible and adapting to the environment.

“The biggest lesson I’ve learned is to stay flexible,” she said. “Sometimes one interview may run over, but you have to work as a team, you can’t be alone. A team balances what you are doing, especially if the timing slips. Having the right team and strategy going in is very important.”