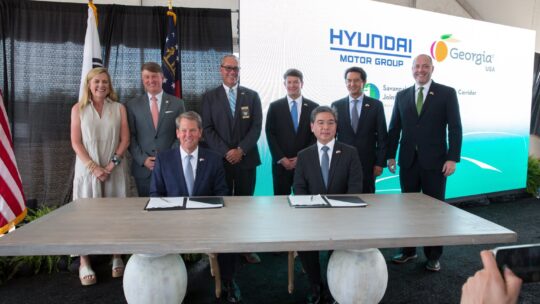 Alongside Hyundai Motor Group executives, Kemp announced the company will open a $5.5 billion electric vehicle and battery manufacturing facility near Savannah. The massive foreign investment and 8,000+ jobs it will create were reason enough for bragging. Still, Kemp and team provided a bipartisan blueprint for scoring major PR. Here’s how they did it.

First, good PR strategy requires substance. The meat in the Hyundai news was substantial and tasty. A major international company is opening a first-of-its-kind manufacturing plant and determined Georgia had the ideal business climate for it. Plus, during a time of great economic uncertainty, jobs and money are shots in the arm for the state’s economy.

Third, having all the players on the same page is a critical multiplier for getting out the word. Both the governor’s office and Hyundai issued press releases with statements that drove the positive narrative and provided content for state, national, and industry media outlets.

Reporters, editors, and other media gatekeepers are key players to corral when making a major announcement. To this end, Kemp’s 1,400-word press release was written masterfully. Its statements and facts gave outlets–from local Savannah press to national media to auto and tech industry trades–the elements of a ready-made story. It even beat weekend deadlines.

Timed with a visit

This doesn’t appear to have been an accident; according to FoxBusiness, the state and Hyundai “solidified” the deal earlier in the year. The parties apparently agreed to wait for a strategic release date. That date gave the Biden administration an international PR win and Kemp a statewide PR victory just days before his hotly contested primary today (May 24) against former senator David Perdue.

Interestingly, Fox Business also reports that Kemp did not coordinate directly with the White House, which may explain why the president praised Georgia’s Democrat senators for helping make the deal happen, but didn’t mention Kemp.

Stay in your lane

This probably worked well for Kemp; he made a play for his target audiences (Georgia residents and conservative primary voters), while Biden appealed to his (domestic and international audiences who prioritize green energy). Both political opponents won without hurting the other.

Fifth, well-planned media strategy creates a chain reaction for expanding PR reach. Government and other sources tipped off the media well before the May 20 press conference, creating a drip strategy that primed the pump. This ensured that press, influencers, the public and others paid attention when the big reveal happened.

Last, but no less important, great PR benefits don’t stop when an announcement is made. There must be a post-event plan that expands the coverage and its impact. After all, in a vacuum, Kemp scored a major economic victory for his state and office.

Yet, because of the timing, he also gained a trophy to show voters leading up to today's GA primary and, should he defeat Perdue, a trophy to hoist during the general election campaign.

Likewise, Hyundai scored a big victory against electric vehicle and battery competitors like Tesla. It now has 5.5 billion green reasons to declare itself a major player in a technology many consider the future of automobiles.