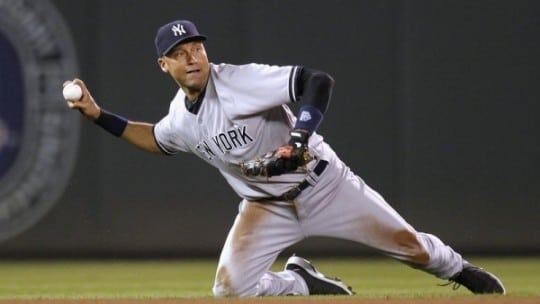 When Derek Jeter starred for the New York Yankees from 1996 to 2014, he could almost do no wrong–he helped the team win five World Series titles, slugged a home run to join the 3,000-Hit club and ended his career with the sixth-most hits in Major League Baseball history.

About the only thing he did wrong–in the PR sense–was that as a young player he partied and stayed out late. He was able to deflect that issue, dancing in a conga line in a Visa TV commercial with “The Boss,” legendary owner George Steinbrenner.

In essence, Jeter, the team captain, had the PR teflon of a slick politician–nothing bad seemed to stick to him and he had his way with the press by saying nothing controversial. Everybody seemed to love him, and he's a Hall of Fame shoo-in.

Since retiring in 2014, Jeter started the Players Tribune web site and a book publishing imprint but he always said he wanted to own a baseball team. So this year, he and a group of investors purchased the money-losing Miami Marlins.

Bloom Off The Rose

But in a span of a few months, his PR magic–or perhaps his PR smarts–seems to have run out of gas. His management team fired several long-time Marlins executives, reportedly had a role in the canning of local cable channel announcers who called Marlins games and fired a long-time Marlins scout who was recuperating from cancer surgery. Sportswriter Woody Paige of the Colorado Springs Gazette, said Jeter "spent 20 years building up his reputation and good will, and he has really ruined it over the last several weeks."

And that wasn't the worst of it: he then traded the best and most expensive player on the Marlins’ roster: Giancarlo Stanton, the 2017 National League MVP who hit 59 home runs this past season. When Jeter acquired the team, it was $400 million in debt. Jeter reasoned he had to get rid of Stanton's $295 million long-term contract. He also unloaded Dee Gordon and Marcell Ozuna, arguably the team’s only other star players.

There are conflicting reports about how often Jeter talked or met with Stanton during the trade process. Stanton had a no-trade clause and finally agreed to be traded to–who else?–the New York Yankees. Since Jeter got little in return for Stanton, national and local sportswriters criticized him heavily.

There’s also been a controversy over whether or not Major League Baseball knew in advance that Jeter was going to hold a fire sale, unloading the team's top talent to save money. Some contend Jeter's plan was previewed when MLB owners vetted him for ownership. Others say MLB commissioner Rob Manfred had no idea or what Jeter was set to do.

And then Jeter made another PR faux pas–he didn't attend baseball’s Winter Meetings in Orlando, FL, where owners and general managers mingle and talk off-season deals.

Jeter was photographed attending a Miami Dolphins game and a Miami Heat game where he was booed. Pundits asked why he wasn't at the Winter Meetings, schmoozing with his new colleagues and talking to the press in person. He held a media conference call after the Stanton trade but that was criticized also.

Is all of this fair? And what should he do to fix his PR problems?

First, he has to realize that perception is critical. He is no longer a star for the Yankees; he is the new co-owner of a team that hasn't won a World Series since 2003. The fans in Miami have no allegiance to him. They see him come in and trade their star player and drastically cut payroll and they are upset. The press is all over his every move. Jeter has to engage the public and the media, especially in Miami.

When it comes to events like the MLB Winter Meetings, Jeter must attend, be seen and learn from his peers. And he has to be seen in Miami. He needs to hear what fans think. ESPN’s Amin Elhassan put it well, when he said on SportsNation Dec. 20, that if Jeter’s plan is to re-build the franchise with inexpensive talent, “You have to be Mr. Personality. [Be] out in the streets shaking hands, kissing babies and connecting to the community and the history of the organization." Jeter has done the "exact opposite.”

Re listening to fans,  Jeter has responded. On Dec. 19, Jeter made a bold move, holding a Town Hall meeting with Marlins’ season ticket holders. He received an earful. Anticipating the tone of the meeting, media was prohibited from shooting video during the forum.

Media attended, though, and the following tweets were typical. Talk show host Andy Slater tweeted that a fan commented on the irony of the Town Hall being held just beyond the left field wall, since “there won’t be a ball hit in the area by the home team next year.” Miami sports writer Barry Jackson tweeted that when Jeter urged fans to have patience, an older man responded, “I don’t have that many more years left.”

One thing Jeter should know after playing for the Yankees, whose motto was "our goal every year is to win the World Series," Marlins fans want a winner. For the most part, the franchise has been hapless. Accordingly, fans don’t have a lot of patience for Jeter to turn things around by unloading talent and hoping to rebuild with less-expensive youngsters.

Jeter needs to care. We'll assume he does. But he also must look more like he cares: action and perception. Otherwise, Jeter the icon will continue to face bad PR.

Andrew Blum is a PR consultant, media trainer and principal of AJB Communications. Follow him: @ajbcomms