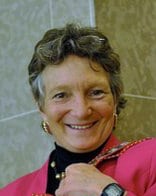 If there’s one lesson from recent crises it may be that the very moment you are considered a “Wall Street darling” is when you should be preparing and rehearsing your crisis communications plan. For very different reasons, two high-flying companies—fast-food chain Chipotle and blood-testing start-up Theranos —took enormous hits in the last month due to PR disasters. How Theranos and Chipotle have handled their respective crises is either a contrast between youthful exuberance and more experience or the different advice the two companies are getting from their respective crisis counselors. In any case, none of the recent tactics being used seem to be restoring faith in the companies or in their share prices.

Chipotle’s problems started back in late October with an outbreak of E. coli contamination in its restaurants in Washington and Oregon. While investigations into that outbreak have continued, a second issue arose when some 80 students at Boston College were sickened with norovirus after eating at Chipotle. By now the fast-food industry has a fat playbook of responses to such crises going back decades; Chipotle has followed most of them perfectly. Essentially they follow the same pattern: Abject apology, promise to fix the problem, cooperate with federal authorities and then announce a plan that will make sure it never happens again. This is pretty much what Chipotle has been doing. Its founder, chairman and co-CEO Steve Ells, has been in front of the media on a regular basis articulating apologies and pledges. Chipotle’s website has been updated and now has food safety front and center. It seemed to be doing everything right, which is why it was somewhat surprising that other members of its leadership changed course and started the blame game a few weeks ago during an investor conference (PRN, Dec 14).

They accused the CDC of having policies that contributed to the perception that Chipotle has had a series of E. coli outbreaks instead of just one. Then CFO Jack Hartung turned on the press—never a good idea when you’re relying on it to get your message out. “Because the media likes to write sensational headlines, we will probably see when somebody sneezes they’re going to say, ‘Ah, it’s E. coli from Chipotle.’” Clearly he was tailoring his message to his investor audience, but it didn’t take long for the general media to pick up on it. Worse, his remarks did nothing to stop the share-price slide, down 30% since October.

Theranos is trying to revolutionize the medical testing business by creating a test kit that requires only a few drops of blood. It’s easy to see why Wall Street would be captivated. 31-year-old CEO Elizabeth Holmes is an articulate and passionate entrepreneur with a vision to make medical tests as easy as checking your bank balance, at a fraction of the cost of what tests cost currently. She predicts that such testing would slash costs 50-80%, thus saving Medicare and other providers billions.

To back up its claim, the prices of all its tests are listed on the Theranos website. The company also has a roster of celebrity investors including Henry Kissinger. Like many Silicon Valley start-ups, while its products were under development, the company operated in secrecy, avoiding the media until its services were ready for market. That meant there were no peer-reviewed tests to back up Theranos’ claims. Then, just when rumors began to circulate that the company was looking for additional financing, The Wall Street Journal published a detailed investigative piece calling into question the efficacy and accuracy of its products.

From a crisis management, the cause of Theranos’ problems may be summed up in a single sentence from the WSJ article: “Ms. Holmes, Theranos’ chairman and chief executive, declined interview requests from the Journal for more than five months. Last week, the company said she would be available to comment, but her schedule didn’t allow it before publication of this article.” As we have shown countless times in these pages for more than a decade, playing ostrich is the worst of all possible strategies. 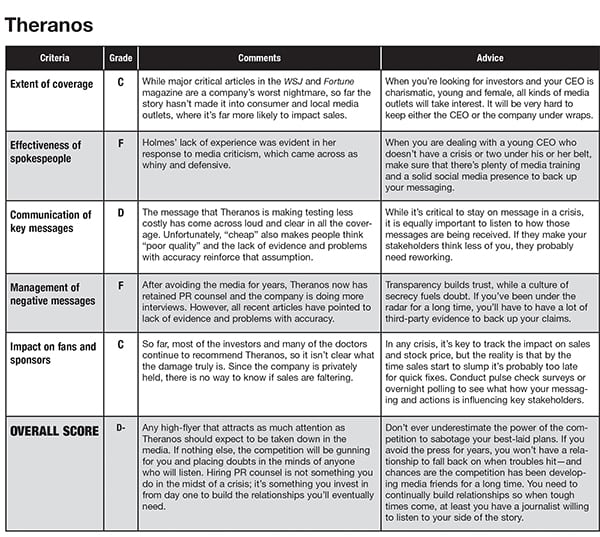