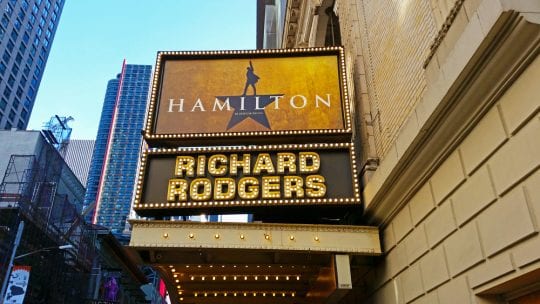 The Great White Way will shine again. And an eager, informed audience will help in its return.

Today (May 11) on "Good Morning America," cast members from shows Hamilton, Wicked and The Lion King announced a Sept. 14 restart of performances. The news comes after theaters darkened for the past year due to COVID-19.

Because Broadway caters not only to New York City residents, but global tourists as well, the reveal on the morning show demonstrates a commitment to working to safely welcome back theatergoers. Also, showcasing stars from three different casts, which in pre-pandemic times competed for audience share, provides a strong, cohesive message that everyone is  working toward the same goals.

Show backers shared this intent in a press release.

The Broadway League, the national trade association for the Broadway industry, supports government and media relations for the theaters as well as its 700-plus membership. Theatergoers can find information regarding ticketing and the process for returning to shows on Broadwayleague.com and Broadway.org, as well as information.

The Broadway League also explained its work with New York State Gov. Andrew Cuomo, in several press releases posted on the site. It announced its reasoning for resuming ticket sales through its work with the state government.

“We are thrilled that Governor Cuomo clearly recognizes the impact of Broadway’s return on the city and state’s economy and the complexity of restarting an entire industry that has been dormant for over a year,” said Charlotte St. Martin, president of the Broadway League. “Nothing beats Broadway. The theatre owners, producers, and other League members will continue to work with the NY State Department of Health and the Governor to coordinate the industry’s return and the related health and safety protocols required to do so.  We remain cautiously optimistic about Broadway’s ability to resume performances this fall and are happy that fans can start buying tickets again.”

The commitment to health and safety can provide theatergoers with confidence in ticket purchases, and that the theater community is making it does everything it can to provide a safe environment upon return.

Bought Broadway tickets today. Might have cried when I hit purchase.

However, even with the thrill of live performance on the horizon, we’ll never forget the Ratatouille Tik Tok musical that entertained us during some of the hardest months of COVID. Thank you, Tituss Burgess.