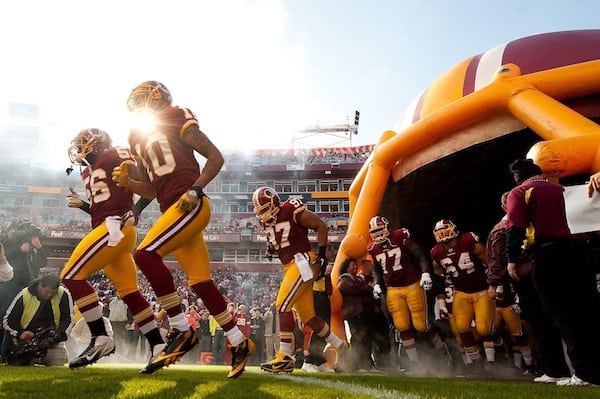 That well-known sports fan, William Shakespeare, said it best: "What's in a name? that which we call a rose By any other name would smell as sweet." In the case of Washington's professional football team, regardless of its name, the club's woeful won-lost record has left an un-rose-like fragrance for years around the capital region. Yet with the country's racial awakening, a decades-long issue over the team's controversial name has moved from a local story into the public square.

[Update, July 13, 9:48 am ET: In a short statement this morning, the team said it will retire its previous name and logo.]

A PR view lays blame mostly on the shoulders of majority owner Dan Snyder. The popular narrative is that the team's almost nonexistent PR and poor record on the field are extensions of its owner.

The name situation is the largest and oldest PR albatross. Team communicators, who surely are as busy as the Maytag repairman, have operated behind the eight ball for years. That happens when the boss digs in and says he will "never" change the team's name. "You can use caps," he infamously added. NEVER.

There are additional examples of the team botching its PR, often with coaches. Snyder has employed a litany of head coaches, and let them swing in the wind when they started losing.

In addition, there were ugly incidents with other staff. Here's a particularly bad one.

Birthed as a Racist Swipe

The franchise has a history of racism. Its founder, George Preston Marshall, was a well-known racist. Marshall kept Black players from entering the NFL for almost four decades. Moreover, the team was the last to have a Black player on its roster. Much like Snyder, Marshall was forced to relent.

In addition, it was Marshall who gave the team its name. Surprised?

Fortunately, a statue of Marshall was removed recently from outside the team's former stadium, appropriately on Juneteenth. In addition, not long after George Floyd's killing, the team removed Marshall's image from its ring of honor, too. More important, when will professional football remove him from its Hall of Fame?

Late last week, the long-simmering name-change story gained considerable heat. AdWeek published letters from investors urging brands like FedEx, Nike and PepsiCo to discontinue their relationships with the team over its name.

The brands listened. On July 2, FedEx spoke publicly. It told AdWeek and others it requested a name change. More iconic brands followed. You know how it goes. The financial pressure of FedEx and other sponsors became too great. In a fine piece of reporting, the NY Times said the FedEx offer was one Snyder could not refuse.

FedEx's first-out-of-the-box was not a coincidence. It owns naming rights to the team's massive stadium in suburban Maryland. In addition, the FedEx chairman/CEO, Fred Smith, also owns a piece of the football team. It's rumored that Smith and other minority owners want to unload their shares.

Under the penumbra of the July 4 weekend, Snyder agreed to review the team's name. Finally.

From a PR viewpoint, the name-change issue offers a slew of best practices, most are obvious.

Snyder is well-known in the DC area for being his own man. That's a diplomatic way of saying this former marketer, who bought the team in 1999 when he was 35, is averse to listening to staff, fans or anyone else. Hold that thought.

Had Snyder wanted to listen to the room, he could have. Easily. There was plenty to hear. Local media outlets revived the name-changing story annually. Native American groups, among others, maintained pressure.

Redskins games, to some extent, remain a tradition in the DC area. In the old days, everyone, including politicians, wanted tickets. As you can imagine, at times it was inconvenient for elected officials to attend games of a team with a derogatory name. Despite political pressure–50 senators signed a letter years ago urging him to change the name–Snyder refused.

The team's PR modus operandi is to say as little as possible to media.  Snyder rarely makes himself available to the press, despite owning local media outlets. Had the team played better over the years, perhaps he'd be more available. Maybe not.

Another item that will come as no surprise: Washington sports fans revile Snyder, mostly for the team's above-mentioned lack of success on the field. They also detest high ticket prices the team charges while offering an inferior product.

Early in Snyder's tenure as team owner, a narrative portrayed him as the worst kind of boss. Popular wisdom has Snyder meddling in football decisions despite his lack of knowledge about the sport. The team's poor record is Snyder's doing, according to this version of events. Since Snyder refuses to supply a narrative, this media- and fan-created story persists.

PR pros understand that when bad times come, it's useful to have allies. Considering what you've read above, is it shocking that Snyder's inner circle is, as we noted above, getting smaller?

Incidentally, insiders are incredulous a new name can be arranged in two months, when the regular season begins. Copyright and marketing issues take time. On top of that, Snyder, the reluctant listener, says he needs time to, you guessed it, listen. He wants to hear from team alumni, sponsors, the NFL and the local community. Imagine that.