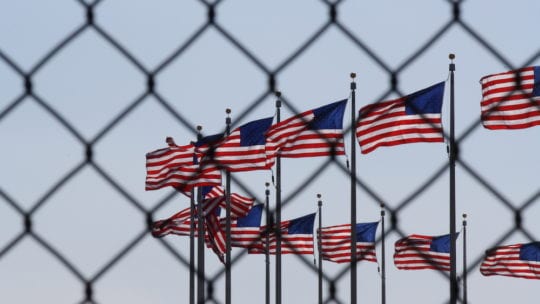 The latest battle between the White House and social media platforms began on May 26, when Twitter attached a “Fact Check” notification to President Trump’s tweet, which included misinformation about mail-in voting.

There is NO WAY (ZERO!) that Mail-In Ballots will be anything less than substantially fraudulent. Mail boxes will be robbed, ballots will be forged & even illegally printed out & fraudulently signed. The Governor of California is sending Ballots to millions of people, anyone.....

While the fact check does not censor tweets, it provides a link with more information, which users can delve into to educate themselves and reach their own conclusions. Twitter introduced the fact check process as a part of its Civil Integrity Policy, created to protect users' rights around civic discussions, particularly regarding elections. This includes “posting or sharing content that may suppress participation or mislead people about when, where, or how to participate in a civic process.”

We added a label to two @realDonaldTrump Tweets about California’s vote-by-mail plans as part of our efforts to enforce our civic integrity policy. We believe those Tweets could confuse voters about what they need to do to receive a ballot and participate in the election process.

In a Politico article, Twitter spokesperson Katie Rosborough explained that fact check became more important, not just for elections, but as misinformation about the coronavirus spread on the platform.

“We now have the tools in place to label content that may contain misleading claims that could cause offline harm,” Rosborough added.

The Response: An Executive Order

This will be a Big Day for Social Media and FAIRNESS!

In response, President Trump threatened online platforms, promising to sign an executive order today. The order would push the Federal Communications Commission (FCC) to tighten its oversight of online publishers and clarify regulations under Section 230 of the Communications Decency Act, according to Reuters, which obtained a draft.

Currently, Section 230 exempts online publishers for being held liable for much of the flowing contributed content.

The president’s order would tighten FCC surveillance, particularly when it comes to “deceptive” acts of communication.

All of this seems to be gray, nuanced back-and-forth. It's safe to say citizens (and Twitter users) are not impressed.

Many users argue that this executive order seemed to be drawn up rapidly, while crises like COVID-19 have lingered for months, with very little federal intervention.

A growing pandemic in February: Trump does nothing.

Twitter calls him out on his lies: An Executive Order within days.

It is telling that while people are protesting the brutal, disturbing, and tragic death of George Floyd in Minneapolis, and the country recognizes more than 100,000 COVID-19 deaths, that the president of the United States' sole focus is Twitter adding a tiny link on his tweets.

Of course Facebook’s founder, Mark Zuckerberg couldn’t resist putting his two cents in regarding the executive order and Twitter’s actions. Opposite of Twitter, Zuckerberg maintains that Facebook is not responsible for misinformation.

This is ironic as Zuckerberg appeared in federal court numerous times regarding Facebook-enabled election misinformation and interference. Facebook has announced plans to fight back against misinformation and work with local and national newsrooms to promote necessary reporting.

In fact, Guy Rosen, VP for Integrity at Facebook, published a piece on its newsroom yesterday, listing all the ways Facebook is working to address such issues, including “reducing clickbait headlines,” “improving how comments are ranked,” and “reducing links to misleading and spammy posts.”

“This job won’t ever be complete because at the end of the day, online discourse is an extension of society and ours is highly polarized,” Rosen said. “But it is our job to reduce polarization’s impact on how people experience our products. We are committed to doing just that.”

Meanwhile, Zuckerberg appeared on Fox News Wednesday, contrasting this statement by saying, "I just believe strongly that Facebook shouldn't be the arbiter of truth of everything that people say online."

Twitter’s CEO and loyal defender, Jack Dorsey, took the policy on his back, and clashed with Zuckerberg, on his “arbiter of truth” comment. Dorsey reminded him, as well as others, of their intention to promote pertinent information and company transparency.

Fact check: there is someone ultimately accountable for our actions as a company, and that’s me. Please leave our employees out of this. We’ll continue to point out incorrect or disputed information about elections globally. And we will admit to and own any mistakes we make.

But forget about the Twitter/Facebook feud. Let’s get back to that executive order and the catalyst of this whole situation. What will it mean for users, companies and communicators? Does the order have teeth?

More than likely not. As of our publishing time, a federal appeals court checked down a lawsuit filed by conservative legal organization Freedom Watch and activist Laura Loomer. The Hill reports the lawsuit “alleged that the Silicon Valley giants were coordinating together to silence conservative viewpoints and that they were violating the First Amendment and antitrust policies.”

The D.C. district court dismissed the claims. “Freedom Watch failed to offer a satisfactory First Amendment claim against the tech companies." It noted, "In general, the First Amendment prohibits only governmental abridgment of speech.”

The First Amendment will always play a part to uphold political and online discourse. The likelihood that an executive order will impede on that is very slim.

But what’s really emerged from all of this back-and-forth is the disconnection between many tech founders and their stance on misinformation. For any real progress to be made, it may be worth it for these leaders to hash it out in a closed-door, transparent conversation. Power remains in numbers, and those numbers should include the people you are serving.