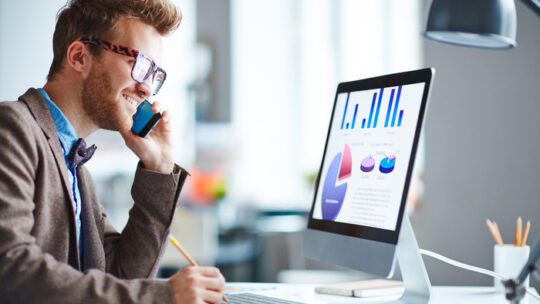 It’s a popular refrain the PR pro hears from executives: I’m an expert on XYZ topic. So, why doesn’t the media call me for interviews?

One reason is that the reliable source club is small. Anecdotally, it seems journalists have a cadre of go-to sources they tap consistently, especially when covering breaking-news stories. To some extent, that’s understandable.

Among the most important characteristics of a go-to source– besides having knowledge of a topic and a willingness to share it–is that most of the time she’ll respond quickly when a reporter calls, texts or emails. As such, it’s hard to blame reporters on tight deadlines for returning to the same people.

And, as PR pros know, the typical reporter is covering more stories and beats as newsrooms consolidate. Moreover, journalists not only cover stories, but they’re also tasked with creating a social media presence for themselves and their content. So, sources who seem to drop everything when a media member calls are must-haves.

Accordingly, PR pros must ask themselves and executives desiring press exposure: Is consistently responding quickly to media requests the best use of your time? Those who answer yes are some of the people featured consistently in articles and TV news.

Is this group smarter or better informed than people you represent? Not necessarily, yet they’re willing to play the game.

Problems inherent in this system are obvious. In addition to being difficult for others to gain admission to the club, diversity is an issue.

For instance, no matter how well-informed a reporter’s sources, asking questions of the same three-dozen people results in a limited perspective. 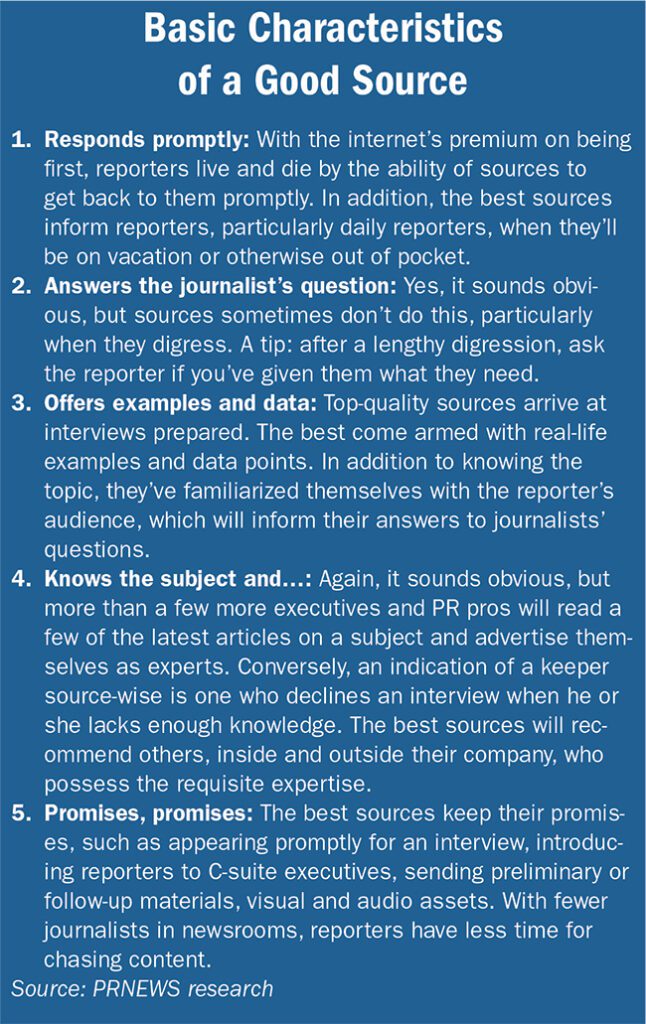 Moreover, returning to the same sources puts a premium on the group’s composition. It’s journalistically dangerous when too many sources share similarities, such as gender, race, age, politics, profession, income and geography.

All that aside, part of many communicators’ remit includes getting themselves and executives they work for quoted and interviewed in the media. Moreover, PR pros often are tasked with placing (and sometimes writing) thought-leadership essays in trades and mass-circulation outlets.

So, we asked several go-to sources, PR pros we rely on for insight, how they get quoted regularly. Similarly, how do they counsel executives who want media exposure?

For topicality, we included PR sources who specialize in environmental issues, one of today’s hottest sectors. We asked these specialist PR pros about how they work with mainstream journalists, ie, those who don’t cover environment-related subjects regularly.

Moreover, we discussed with them an issue alluded to above, namely that with the ranks of journalism shrinking, more reporters will have large gaps in their knowledge of climate issues. What should sources do in such cases?

Before speaking with sources for this story, we raised the stakes. Certain characteristics of good sources were made off limits, as we agreed they are table stakes (see chart). In addition, we asked the PR pros about being sources themselves as well as how they prepare executives they represent to be sources.

The first characteristic of a go-to source is something basic, yet often overlooked. Humanity. Nearly all those we spoke with for this article used human or human being when describing how they counsel interacting with journalists.

“Check in from the time to time just to say hello…without having an ask” for the reporter to create a story about a company or executive you represent, says Jenny Wang, VP, Clyde Group.

Indeed, Wang keeps in touch with journalists even when they leave industries she represents. Years later, when some reporters return to those industries, Wang has new old-pitching targets. With so many journalists switching beats and jobs, it’s a useful tactic, she says.

For example, don’t show up late, she says. And if you promise something as a follow-up after an interview–for instance, additional examples or data, a visual asset or an exclusive– “you’d better deliver it.” The goal, Mitchell says, is treat the first interview and every interview as an opportunity for “the next one. If you’re helpful, [media members] are more likely to come back to you.”

'Nice to Meet You'

Leading with humanity bleeds into another topic: working with reporters for the first time. All the PR pros we interviewed recommend researching the reporter before your first formal interview. There are several reasons to do this.

First, you glean professional information, a staple of media relations. Ingesting the reporter’s content provides information about what they’ve covered and how.

For instance, you can learn the reporter’s style. Does the journalist write favorably about the industry or company you represent, or is she a critic or combative? Does she like to include data and/or lists in her content? If so, have them ready, says Melissa Baldwin, SVP at TigerComm, an agency in the cleantech and renewable energy space.

Second, researching the reporter offers personal insight that a source can use as an ice breaker, particularly during a first encounter.

For example, Eaton searches social media to learn a reporter’s hobbies and any interests she has in common with the journalist. She uses these as a way of beginning a conversation with a new reporter.

Mitchell, who works often in the food sector, says reading the reporter’s clips often offers a way to begin an interview. She’ll open with, “’I saw that you wrote about XYZ restaurant. I ate there the other night.’”

While there was consensus on the importance of pre-interview preparation before meeting with a reporter they didn’t know, the PR pros also concurred that subject-matter preparation is a must, regardless of how long you’ve known the journalist.

For Eaton, it’s important that a source not only know the subject of an interview, but also what others are saying about it. “Reporters want you to have a unique perspective,” she says. “Repeating what everyone else is saying is a fast way to get you cut” from the resulting content.

Adds Mitchell, “Ultimately, it’s about giving [reporters] a good story...and something useful for their audience.” This includes offering real-world examples and data that bolster your point of view, Wang and Mitchell say.

‘Where is This Going?’

Another point of agreement is that sources should prepare for an interview by getting as much information about the interview. At the least, sources should inquire about the planned scope, thrust and arc of the story, Baldwin advises.

Another useful piece of research is asking for questions in advance. However, the PR pros we interviewed admitted reporters don’t always respond to that inquiry.

Another question that’s sometimes rebuffed is, ‘What other sources are you speaking with on this?’

A tip, Mitchell says, is setting up these asks with, “‘I want to be the best source possible. So, can you let me know what areas we’re going to touch on?’”

While PR pros know an interview might not go as planned, executives may not. Prepare them for that possibility, Wang counsels. A good practice, she says, is anticipating and practicing responses for the toughest questions that could arise.

There also was consensus on avoiding topics the source doesn’t know about. Stay in your lane, each of our PR pros said. For example, Wang likes to enter interviews with three to four messages that she sticks to.

Similarly, the PR pros advocate against hedging or speculating. There’s nothing wrong with admitting a question is outside your expertise, Mitchell adds. And, when you know the topic/questions in advance, decline the interview and suggest another source, Wang says. “This makes you a good source regardless of whether or not you’re right for this interview,” she adds.

Another thing that can burnish a source’s reputation is the ability to educate a journalist. When warranted, Mitchell will send studies and reports in advance of an interview. “You can’t assume reporters will know your business,” she says.

Once she’s secured a reporter’s interest about a company she’s pitching, Baldwin likes sending email “heavy with article links” ahead of time. “I want [the reporter] to do some research” before an interview, she says.

In some sectors, such as climate change, sustainability, clean energy and the environment, sources often encounter reporters who lack a solid background in the topic. “There are a lot of acronyms and [general interest] terms reporters won’t know,” Baldwin says, mentioning additionality, PPA and IOU. As such, Baldwin explains them during interviews with non-specialist reporters and in “general press releases.”

Again, how a source approaches education is key. When she fields a cold call from a general reporter, Baldwin approaches it “as a chance to be seen as a supplier of information, not just as someone asking” for coverage.

On the other hand, when she’s pitching a general reporter, Baldwin offers a “30,000-foot view” of the industry and then provides specifics about the company she’s representing.

Offering Context on the Environment

Lindsay Singleton, managing director at ROKK Solutions who works often on ESG and climate change, emphasizes providing generalist reporters with context. She offers such reporters “research and materials that can help them better understand the context of why certain issues related to climate or sustainability are important." As we noted above, she finds it useful to supply proof points and data to bolster her point of view.

Singleton finds national and mainstream reporters often focus on environmental issues linked to current news stories, such as COP, emissions and government approaches. “There is so much more to the story, yet we tend to focus on global responses as it's a more easily digestible story to tell.”

Yet Singleton encounters many journalists who don't know how much support there is for sustainability from the general public, “no matter your political beliefs.” She offers research ROKK did with Penn State on this issue.

“We were shocked to find that American voters across the political spectrum view climate as a crisis and strongly support efforts to tackle sustainability,” she says. Telling this part of the story raises awareness about the topic but also shows it’s a bipartisan issue.