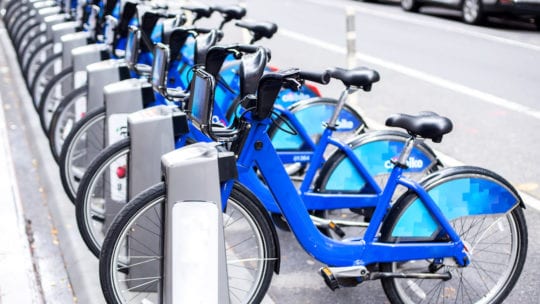 This week, rideshare apps Uber and Lyft announced they would be suspending service in some U.S. cities following protest-related curfews put in place by local and state governments. Curfews have been implemented in cities around the country including Los Angeles, Richmond, Atlanta and Chicago and many others.

New York City Mayor Bill de Blasio announced an 8:00 p.m. to 5:00 a.m. curfew Tuesday night, the city’s first such rule since 1945. The curfew, effected following consultation with local police and state government officials in hopes of preventing looting, extends to June 7. While essential workers are exempted from the plan, much of local traffic was banned in Manhattan.

While Uber and Lyft complied with the order, Citibike—the bicycle share program owned by Lyft—did not go down without a fight. Bikes were not available for use after 8 p.m.

On Tuesday Citibike tweeted an apology, acknowledging the inconvenience for those with few options for traversing city streets.

Although the decision was handed down from above, the company took responsibility. “We know how disruptive this was for our riders, especially for those who rely on bikeshare as a critical option for essential travel needs, and we’re sorry,” the statement read. Apologizing and acknowledging the issue in a timely matter—noting the group impacted, “essential” travelers, a nod to essential workers—positioned the company as an entity in a tight spot, rather than a transportation provider needlessly withholding service.

In the same thread, the company said it had been working with the Mayor’s Office and the Department of Transportation “hoping” it could avoid another shutdown. The tweet tagged the official accounts of both government entities, a social media tactic long espoused by advocacy groups, unions and activists in order to hold leaders accountable.

Toward the end of the same thread, the company made a gutsy move: publicly stating dissent with local government. “We disagree with this decision,” Citibike tweeted, more explicitly calling out the essential service workers that the lack of transportation impacted.

We disagree with this decision and believe it is important for the system to remain open and provide a reliable transportation option. We know how disruptive this is to everyone who relies on Citi Bike to get home — especially essential workers.

Taking a stand can be risky as a brand, particularly one owned by a nationwide corporation, but in this case, the communications response struck home as the company “Lyfted” itself out of public scrutiny. While a few Twitter users suggested Citibike should engage in “civil disobedience” and refuse to comply, another user thanked the brand for its accessibility up to this point, and the “disagreement” tweet has, as of this writing, been liked over 300 times and retweeted nearly 80 times.