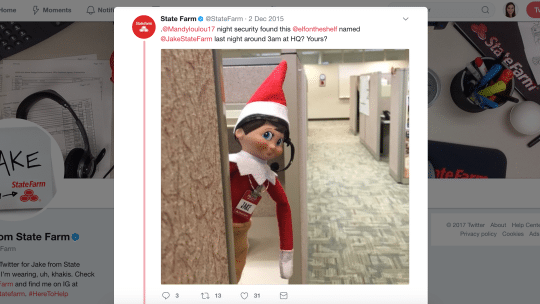 Humanizing your brand online isn't always easy, especially if you work in an industry that's perceived as stuffy and stodgy. But State Farm Insurance is shattering those preconceived notions by using social listening to personalize their brand in unexpected ways.

We’ve all heard the old adage that you have two ears and one mouth because you should listen twice as much as you speak, and the same applies to a brand's social media presence, according to Joe Strupek, assistant vice president of public affairs at State Farm Insurance.

“[It’s] about 70% listening and 30% content,” says Strupek. “I think we would all agree that you learn more by listening and helping than you do just publishing.”

Strupek, who will speak at the upcoming Digital and Marketing Show Oct. 17-19 in Miami, shared some case studies and best practices for utilizing social listening on Twitter to humanize a brand.

You Don't Always Have to Respond

One common mistake brands often make is feeling the need to immediately respond to all positive or negative tweets. But you first need to decide if the tweet even warrants a response.

Many times, brands have taken a positive tweet by a consumer and retweeted or quoted it, but doing so can be risky. “[You] can turn a positive to a negative if the consumer wasn’t looking to become a company spokesperson,” he says.

“The best response I have seen to a negative tweet for any brand is when a brand fixed an issue that was brought to their attention through social, and the consumer themselves follows up with, ‘Brand X fixed my problem!’” Strupek says.

Use What You Hear

One of the best examples of State Farm's efforts at humanizing its brand involves the famous “Jake from State Farm.”

You remember that commercial, right? A wife comes down the stairs at 3 a.m. to find her husband on the phone with someone, and she assumes he must be up to something. She grabs the phone and asks, “What are you wearing, Jake from State Farm?” To which he famously replies, “Uh…khakis.”

The commercial was a huge hit, and Jake from State Farm became a well-known character on social media. State Farm even created a Twitter handle, @JakeStateFarm, and they’ve had some fun with it.

When one little girl lost her Elf on the Shelf (who she had named Jake from State Farm, complete with a homemade pair of khakis), @JakeStateFarm stepped in. Using social listening, the company found a tweet by @Mandyloulou17 saying that her daughter had lost her Jake from State Farm elf.

Omg! WE HAVE A SITUATION...WE'VE LOST JAKE FROM STATE FARM (aka @elfontheshelf)!!! Moving is horrible!

Strupek explained that State Farm got another elf and even made him a new little pair of khakis. They shared some photos of him playing around their office, and of course sent the new Jake to the little girl.

.@Mandyloulou17 night security found this @elfontheshelf named @JakeStateFarm last night around 3am at HQ? Yours? pic.twitter.com/MSjbyv7B6t

The tweets didn't go viral, but they created a great rapport with the customer in trouble and brightened the Christmas season for this mom and her daughter without asking them to be brand ambassadors. The @JakeStateFarm Twitter handle is a fun tool for the State Farm brand and with 40.8K followers, it's a huge success.

Another great example? State Farm found a tweet where someone used their jingle "Like a good neighbor State Farm is there...I need food." So, of course, they sent him pizza!

@MichaelTheSly Not sure if you are still hungry, but we would love to help. DM your address and favorite restaurant and we'll hook you up.

It's such a simple concept, but it makes a personal connection with this customer, who may or may not already have State Farm insurance. But now, he's going to spread the word about the #powerofthejingle. 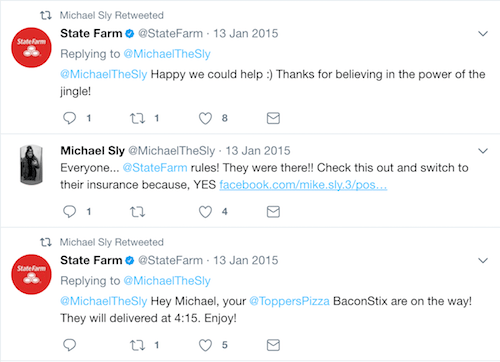