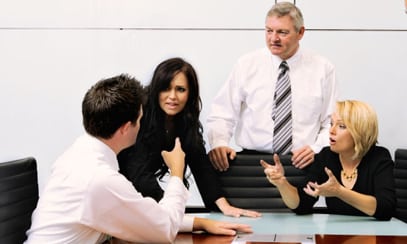 When PR pros get together, often crisis is the discussion topic of choice. Inevitably, when speaking about a notable PR crisis, someone utters a variation on, 'What I wouldn't give to be a fly on the wall during that crisis.'

Jim Lindheim had a seat at the table during some of the biggest PR crises. A former chairman of Burson- Marsteller (1995-1996), Lindheim worked on the Tylenol and Bhopal crises, as well as the New Coke PR crisis, to name just a few.

His years of experience have shaped his thoughts about crisis communication. In short, his thesis is that those of us who write about and discuss PR crises, often overlook the role of people around the table. Yet their thoughts, motivations, desires and limitations are critical to how companies shape crisis management. True, the "rules" of crisis – acting swiftly, with compassion, accountability and transparency – are integral. Yet the personalities around the table also are important, if not more important, than the corporate crisis plan. And then there is corporate politics.

A keynote speaker during PRNEWS' upcoming Crisis & Measurement Summit in Miami late next month, Lindheim discussed his crisis views recently with PRNEWS' Justin Joffe. Lindheim also spoke about his novel, Spin, a fictional account of a PR crisis. Edited responses from that dialogue are below.

PRNEWS: Even with the ubiquity of social media and the 24-hour news cycle, we’ve known the basic rules of how to communicate during a crisis for many years. Why are some companies still not following them?

Jim Lindheim: Yes, we have known for decades the basic “Golden Rules” of how to communicate in a crisis.  Actually, what amazes me is how the growth of social media and the 24-hour news cycle haven’t changed those rules very much. In fact, companies have gotten much better at knowing and following the Golden Rules.  Even the lawyers [laughter].

And yet, every month, we see articles at PRNEWSonline that dissect yet another failure.  Why? It’s the human factor – the personal and organizational dynamics that kick in when the proverbial stuff hits the fan. Egos, fear, organizational tensions, panic, personal agendas, strong personalities in the C-suite can get in the way.  That well-oiled machinery described in the crisis manual doesn’t always kick into gear.  Instead, a human drama plays out.  And the Golden Rules don’t provide the script.

PRNEWS: You’ve told us previously that being successful in a crisis means being successful on the inside. How would you advise communicators to figure out what strategies to implement for a solid internal structure/plan? What does that look like?

Lindheim: I don’t think there is a checklist for success on winning the war that may explode on the inside of a company.  Let’s face it: even in non-crisis times, there are “organizational politics.”  Who’s in, who’s out, who’s got the boss’ ear, whose budget went up or down.  In a crisis, all that becomes amplified.

If, as the communications team, you already have built strong bridges to critical allies in legal, marketing, manufacturing, etc., that will help enormously.  Similarly, if you really understand your corporate culture and its lodestones – is it profit, is it the brand, is it technology, the stock price—and you know how to mobilize that in your strategy, that will also help.  In addition, if you understand how power really works – who actually carries the day in the C-suite – try to use that.

Your one ace card may be monitoring the beliefs and sentiments of your key stakeholders (e.g. consumers, customers, regulators). In many cases, that can bring a powerful argument to the table that no one else is going to have.  But, in the end, the inside game is a power game; not a game you can win just because you’re right.

PRNEWS: What did working for chemical and energy companies teach you about using expert sources and a science-based approach in your crisis communications?

Lindheim: All of us who work in communications know that persuading people requires emotion and reason.  As someone who worked in the early days of the environmental movement, I quickly learned that companies in industries like energy and chemicals wanted to communicate facts. For example, “Don’t worry. X parts per million in water is not a risk.”

But the public was mistrustful of these industries and felt so little sense of personal control over environmental hazards. As a result, such communications were completely unpersuasive.  Happily, there are some very good scientific studies of “risk perception.” They show how building trust – by demonstrating corporate concern for public safety and environmental goals – is a critical first stage of communications.  Those studies allowed me to talk “science” to the companies. They helped me convince them to stop talking “science” to the public. What worked was talking more about shared values and concerns.

PRNEWS: Tell us about your background as a crisis counselor, and how it led you to write “Spin.” Why was writing a  fictional story the best route?

Lindheim: Colleagues and clients kept suggesting that I write my memoirs.  After all, over 30 years I’d been involved with a lot of famous corporate issues. But it was impossible to write a memoir about what I had experienced in the “room where it happens.”  There were issues of confidentiality and client loyalties. In addition, there was the very real possibility of a Rashomon effect – I was just remembering my perspective on events.

But I knew I had a lot to tell. So, I wrote a novel, using a crisis counselor as a first-person narrator, describing and commenting on the crazy, evolving situation.  Most PR people who read the book feel really at home in the world I’ve concocted.