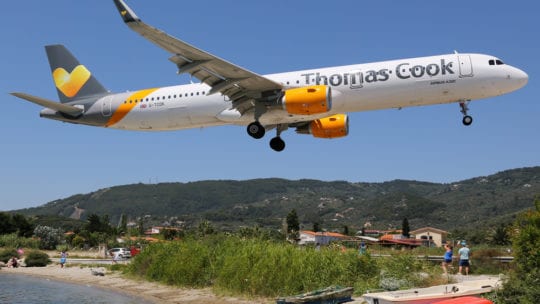 Word of a shutdown spread late Sunday in Britain, after talks between Thomas Cook officials, banks and other shareholders ended without agreement. A few hours later, the Guardian reported that scheduled Cook flights disappeared from travel web sites. Within that period of time the tweet below made things official. 600,000 tourists were stranded, at least temporarily; and 9,000 workers at the world's oldest travel conglomerate were left jobless. In addition to airlines, Cook ran package tours and owned hotels.

We are sorry to announce that Thomas Cook has ceased trading with immediate effect.

Internal and external communications were a mixed bag. Some Cook employees, particularly those in the company's United Kingdom offices, heard the bad news yesterday morning (Sept. 23) from CEO Peter Fankhauser. “It is a matter of profound regret to me and the rest of the board that we were not successful,” he said. “This marks a deeply sad day for the company.”

Others, in remote locations, reported finding a terse note on locked doors. One story has a Cook employee discovering her fate on Facebook.

Alexander Graham Bell put it well: "When one door closes, another opens." From the viewpoint of communications, it's interesting to look at the Cook incident's ripple. It's clear that some organizations did and said things that are improving their reputations. At the same time, brands also hurt themselves.

Unfortunately, bad news sells. Numerous newspapers included stories of stranded tourists, as well as holidays and weddings ruined from the Cook shutdown. Airlines came to the 'assistance' of travelers booked on future Cook flights. Some increased routes in former Cook hotspots. With Cook out, seats declined and demand rose, as did prices.

It's rarely a good day for airline communicators when the morning's headlines blare, "Rival Airlines are Hiking Prices by as Much as 400% after Thomas Cook Collapsed."  Worse than that Business Insider headline - the story told of carriers doubling and tripling prices within the past day for flights on former Cook routes - were the relatively cold, mechanical responses airline communicators employed to explain the situation.

"Our pricing, as is common practice in the travel industry, is based on the principle of supply and demand," a Jet2.com spokesperson told Sky News. We'll give Jet2.com the benefit of the doubt and speculate that Sky News edited out the statement's more sympathetic portion.

Perhaps we're being too charitable. A British Airways spokesperson said nearly the same thing: Flight prices are based on supply and demand. In addition, the BA spokesperson denied that the carrier was targeting Thomas Cook routes.

[Tip: should U.K. regulators investigate pricing in the aftermath of Cook, British Airways would be wise to be ready to prove it was indeed not targeting Cook routes.]

Still, the Sun newspaper in Britain, not known for its restraint, reported alleged price gauging in a story underneath the header: "RIP OFF ‘Greedy’ Travel Firms are ‘Cashing in’ on Thomas Cook Collapse by Quadrupling Holiday Prices."

Of course, when communicators are handed ugly facts - such as doubling and tripling prices on former Cook routes - PR pros can do little to soften the blow. There's a reason economics is referred to as the dismal science.

Still, it's bad optics. Speaking of which, the U.K. government is hurting and helping its reputation. Critics point out that the government of embattled PM Boris Johnson had a chance to save Thomas Cook, but refused. J0hnson on Monday blasted Cook bosses who took handsome salaries as Rome burned.

On the positive side, Britain's Civil Aviation Authority is earning points with Operation Matterhorn. This undertaking aims to return about 150,000 Cook-stranded British travelers to Britain. The government has chartered several airlines' aircraft for the 2-week-long job.

And there were examples of brands resisting the temptation to gorge on distressed tourists. In fact, some went above and beyond to help. Several included examples of well-done communications.

Palace Resorts, for example, was on its way to burnishing its reputation with this well-crafted statement: "Palace Resorts greatly enjoyed its long standing relationship with Thomas Cook in the UK....While we are disappointed in its demise, Palace Resorts will continue to honor all existing & future reservations booked through Thomas Cook and will honor those reservations at the original agreed upon pricing."

Palace's statement included information on how to re-book. It ended warmly, saying it will expedite transfer of existing and future bookings. "Palace Resorts’ guest experience is our top priority."