Office Depot Foundation  - "Be The Difference. Speak Up Against Bullying" Program 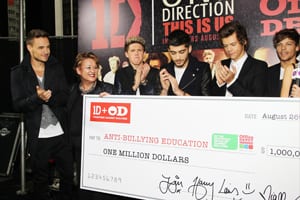 Research shows that an increasing number of fourth through eighth graders report being victims of bullying. An estimated 160,000 students skip school every day to avoid being bullied, while 40% of middle schoolers believe that violence is increasing at their schools.

It was decided quickly that the best way to reach children would be through a program of school assemblies featuring a dynamic speakers.

Schools that are interested in participating can visit the Office Depot Foundation website and submit an application. The speaker’s scheduling team then makes the specific arrangements.

"Be The Difference. Speak Up Against Bullying!" launched  during the first week of September (2013) in Texas. Through November 22, 125 anti-bullying assemblies were held at nearly 70 schools in 11 states and has reached approximately 46,000 students, teachers, school administrators and parents.

Along with Office Depot’s corporate public relations efforts, media coverage for the anti-bullying initiatives has included more than 886 million impressions.