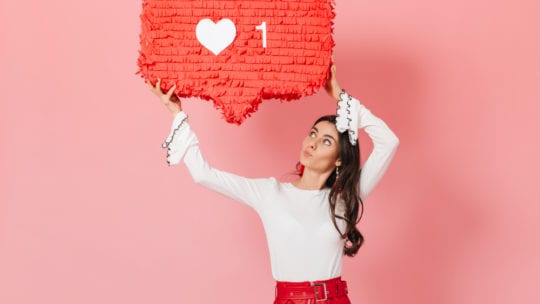 Brands love holidays. And it turns out they love love even more. As Valentine’s has evolved from chalky conversation hearts and homemade cards sticky with glitter glue and paper doilies, to slick, pre-cut Star Wars valentines and Starburst heart-shaped jelly beans, every adjacent company seems to be vying for consumers' hearts.

This week, Pepsi, which has been trying to make Crystal Pepsi a thing again, launched a giveaway for a lab-grown diamond engagement ring, also created with Crystal Pepsi. Turns out you can boil the beverage to its purest form, a carbon powder. The powder was used to create a 1.53-carat sustainable diamond.

But brand love isn’t just for consumers. We at PRNEWS found campaigns to fawn over. The team picked the campaigns it loved most from the past year, delivered across various platforms. Here are the memorable messages that made us swoon.

Campaign: “The Gift That Doesn’t Give Back”

About the Campaign: Aviation Gin, owned by actor Ryan Reynolds, worked fast to hire and develop a spot for the actress who appeared in a not-well received Peloton commercial, that sparked outrage from consumers because of its perceived sexism. Reynolds tweeted the video to his followers, and it had 9 million+ views on Twitter and 4 million views on YouTube within the first day.

Why I Love the Campaign: I love how quickly Aviation Gin and its agency turned around the spoof. Today’s 24/7 news cycle makes it imperative for marketers to be “on” at all times, and many brands have developed war rooms for special events to keep up with their competition. It’s not unusual for brands to spar with one another in real time on social media, but turning around a spot like this in two weeks is unusual. It ups the ante for marketers everywhere.

Impacts of the Campaign on business/culture/politics/etc.: This ad will most certainly be a case study for marketing students and practitioners for years to come. It will be interesting to see how marketing teams and brand war rooms evolve from here.

Campaign: “You Must be Steven’s Phone”

About the Campaign: It’s part of Xfinity’s effort to protect customers from people stealing their WiFi. It also associates Xfinity with security generally. This works well for Comcast, which is moving big time into home security. It also highlights the convenience of the Xfinity network. In the ad, the father gets a message on his phone that Steven’s Phone has invaded his network, to say nothing of his daughter’s bedroom.

Why I Love the Campaign: It’s a disarming way to discuss a serious topic: WiFi network security. Clearly, parents don’t buy Xfinity’s services to spy on their kids (well, maybe some do). Still, stealing WiFi is an important concern. What’s great here is that instead of offering a dull security commercial, this ad is charming and highly identifiable.

The opening music, by the Strollers, “Go Where My Baby Lives” (1957), sets the tone for a 50’s romp. Maybe the tone is even older. A young man climbs up the trestle to his girlfriend's window, a la Romeo and Juliet. How romantic. And heck, we're running this article on Valentine's Day, right?

We love how the ad gives you a bit of the 'things aren't always what they seem.' It's dark and the young man is creeping around. He's there to rob houses, right? No, we see the young man fusses with his hair. How cute, we think. He's not there to rob the house.

But then he's spying on the place, watching as someone shuts a bedroom light. Everyone's off to bed presumably. It’s safe to move ahead. He might still be robbing the place.

He avoids a growling pooch growls deftly. Yes, he's a robber. He shimmies up the trestle outside the house and begins to enter a girl's window. She and he exchange smiles. Oh, good, he's just there to chat with his girlfriend. Of course, we knew it all along.

The boy barely penetrates the threshold and as soon as that happens, dad, a total loser in a bathrobe that nerds everywhere covet, spoils things. And adding to dad's extreme dweebster cred, instead of saying, “Hi, Steven,” the girl's old man says, “You must be Steven’s Phone.”

While Steven’s exasperated expression is good, as is his hand wave as he heads back down the trellis, the look on his girlfriend’s face is priceless.

Impacts of the Campaign on business/culture/politics/etc.: There's been a flurry of renewed interest in The Strollers. In addition, the ad has forced me to do my homework. I always find out if my dates' family has a dog and a Comcast/Xfinity account before I attempt a midnight rendezvous.

Brand: The state of New Jersey

we told you to keep this on the dl https://t.co/qp2py2XtRZ

About the Campaign: New Jersey’s official Twitter account took a novel approach to communicating on the platform by fully embracing hot takes, starting flame wars and posting only the dankest of memes. Twitter was a smart choice since one could probably say it’s the most Jersey of the social media platforms. But as with any PR strategy, all of this is to get people paying attention, so the state can deliver important, apolitical – as long as you don’t think Central Jersey’s existence or the fact that Taylor ham is called Taylor ham is political –  information to residents. Come for the memes, stay for the civic engagement.

Why I Love the Campaign: I could literally talk about how amazing this account is (and the women behind it are) for days, years, a lifetime. From vehemently defending the correct pronunciation of Newark (Nork), to going after Delaware, New York and Pennsylvania, everything this account posts is pure gold. This obviously is the product of people who love Jersey and the content really embodies the attitude, reputation and character that the state is (in)famous for. Seriously, spend a few minutes scrolling through the feed. I can’t do its brilliance justice here. This is an account that’s for Jersey, by Jersey.

Impacts of the Campaign on business/culture/politics/etc.: While I don’t know if Jersey was the first state to do this, it’s antagonization of Delaware, Pennsylvania and New York has gotten official government accounts and politicians jumping into this style of social media use.

About the Campaign: A viral Twitter feud pitted Popeye’s against its major competitor (Chick-fil-A), getting audiences to choose a side, but even as KFC and McDonald’s jumped into the fray, Popeye’s was first to the finish line. Users wanted to be the first to take a photo with the new sandwich, triggering a shortage, which only increased the hype. Comms and social media teams knew they had a great product, so they ran with it.

Why I Love the Campaign: Like many fast food brands, Popeye’s' voice on Twitter is unique, relatable and endlessly funny. Curt and clever responses to other brands’ boastful chicken sandwich tweets remind me of classic battle rap in hip hop: Competitors are audience-judged, winning applause for the most scathing one-liners.

Impacts of the Campaign on business/culture/politics/etc.: Well, it worked! It’s impossible to deny the social media ROI on this one—RBI announced Popeye’s sales were up 34 percent. This particular campaign was simple and straightforward–“Our sandwich is good, we know it, and you should eat it.” It didn’t try to find a brand purpose angle or layer in “wokewashing,” something that has tripped up other brands in key campaigns.

On that note, I love that Popeye’s knows where purpose-driven marketing belongs, and where it doesn’t. Its latest campaign, “That Look from Popeye’s,” is subtly changing the conversation around the food service industry. They’re turning a stigma against food service workers on its head by making office uniforms high fashion, while spotlighting employees. But this new campaign is not trying to be something it’s not. “That Look” is not (at least directly) trying to sell sandwiches. It’s introduced a playful element with more serious undertones, all while avoiding being preachy. And all proceeds are going to its Foundation.

About the Campaign: Cheetos, which hasn’t delivered a Super Bowl ad since 2009, came back with not just a new product, but a real blast-from-the-past spokesperson as well. Cheetos teased a new product with 1990s megastar rapper MC Hammer, releasing a curiosity-peaking video encouraging viewers to tune into the Super Bowl to find out more. We find MC Hammer at his keyboard, 30 years prior, humming a familiar tune: “U Can’t Touch This.” Cheetos helps him to find that familiar lyric line, as his cheesy fingers (known as Cheetle) hover above the keys.

Why I Love the Campaign: Growing up during the 1990s, this not only invokes nostalgia, but it was just SO FUNNY. I think I watched it 10 times in a row upon discovery. In a volatile world where we are surrounded by tough news and struggles, it was nice to take a break and relieve a beat that brought me back to funky, colorful sweaters, harem pants, fades and chunky chains. It was just nice to smile! And the delivery of the copy was spot on, and cleverly executed. It drove me to sit in front of the TV on Super Bowl Sunday and wait for the next part of the story. And who hasn’t felt the pain, but also the convenience of Cheetos fingers? Very relatable.

Impacts of the Campaign on business/culture/politics/etc.: With 2.5 million+ YouTube views,  the commercial is a hit. Hopefully, we will see a new album and world tour for Hammer, and if not, at least we know how to get out of various work tasks and crying baby situations. Also there’s that new hankering for Cheetos Popcorn...