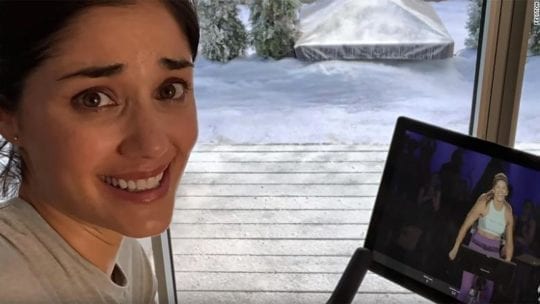 Last week, home exercise equipment manufacturer Peloton sparked outrage regarding an awkward seasonal advertisement. If you haven’t seen the commercial, a husband gifts his wife a Peloton bike for Christmas, and her seemingly painful new hobby ensues. Memes of the actress’s exasperated cycling face popped up everywhere, inspiring criticism around Peloton for seeming to promote sexism, shame and even abuse.

Peloton crafted a response claiming that the ad had been “misinterpreted,” fueling the fire of those offended. "While we're disappointed in how some have misinterpreted this commercial,"the response said, "we are encouraged by--and grateful for--the outpouring of support we've received from those who understand what we were trying to communicate."

In swooped Aviation Gin, a completely unrelated brand, to piggyback on the media attention. Aviation Gin is best known for being owned by Ryan Reynolds, who is also its spokesperson. The brand  decided to hire the actress who played the Peloton wife for an extremely timely commercial that poked fun at her prior character's Peloton weariness, where she can be seen enjoying a drink--or two.

Kudos to Aviation Gin for creatively jumping on a timely opportunity to leverage a massive media outrage with a new take. Newsjacking, as this move is known, takes some delicate maneuvering to determine the right way to enter a conversation. Here are some best practices for hitching a ride on another brand’s wagon.

Aviation Gin took less than a week to format a concept and deliver. Had they been a day or two later, it might not have had the same impact. Lindsay Groepper, president of BLASTmedia, wrote about the urgency of newsjacking for PRNEWS. Groepper writes that brands hoping to newsjack should act fast, because unlike other campaigns where you are calling the shots, “you’re working on someone else’s timetable. As soon as you hear the news, alert your executive team and the company spokesperson.”

This doesn’t mean that brands should slap something together and enter the conversation with a weak response. The best brands and agencies pull everyone together, including those at the top, and put trust in each other to get it right. Talk with the C-Suite prior when reviewing strategies, and create a process for an urgent situation. Identify leadership and creative points of contact ahead of time, for a clever, timely response delivery.

It takes a lot to make a commercial, particularly in record time. However, those extra man hours and camera work paid off for Aviation—so far. The real test—yet to be seen—is how it is affecting sales or new followers interested in the product. For now, the gin has done an excellent job of demonstrating its brand voice as a fun, clever brand that people may be drawn to try.

Not every brand has such deep pockets, however. That’s where the extensive experience of the brilliant individuals you’ve hired comes in. Earlier this year, the buzz grew around a group of people wanting to storm Area 51. Would you ever guess that Kool-Aid, everyone’s favorite childhood beverage, would have an INCREDIBLY apt social media response to the trending topic?

It may be a small, but mighty Tweet. Someone over at Kool-Aid social HQ knows their way around a keyboard and ASCII Art. Oh yeah, it impressed.

When it comes to newsjacking, there’s a thin line between victory and defeat. Some brands can come off as desperate, or “thirsty,” as the kids say, without well-crafted messaging. Instead of trying to reinvent the wheel with a new marketing campaign, sometimes a great strategy can come just from social listening. Pay attention to trends and see what people are talking about, but be wary to jump into the conversation unless it really clicks with your audience and brand perception.

For example, it wouldn’t make sense for the United Nations to get involved in the fried chicken sandwich wars. The UN is perceived as an organization of stature, that is somewhat serious. In 2018, the U.S. Air Force posted a tweet referencing that Yanny/Laurel sound off, which included a link to an article regarding strategy surrounding the fight against the Taliban. Way off the mark. Do not do this. 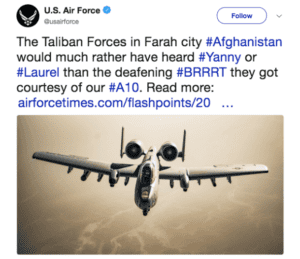 If something feels wrong with a post or content, it more than likely is. Take a minute to think on it, and trust your gut. Making the wrong decision can showcase your brand as opportunist, uncool and could cost it its reputation in the long run. Paying attention to your audience, and what they want, is key when creating relatable, shareable content.