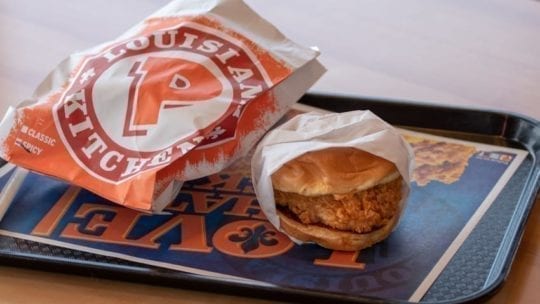 Food brands, whether giant franchises or grocery store mainstays, continued to innovate over the last year with creative PR campaigns and engaging advertising. In 2019, many brands dominated conversations in social media, laying the groundwork for efforts that we will remember for years.

We look at seven noteworthy campaigns that drew in new fans and old, while occasionally ruffling a few feathers.

This truly is America, where choice is everything and supply and demand peak interest. Who doesn’t want what they can’t have? Creating an urgency while promoting a favorable product only helps to increase its popularity, especially if it's actually good.

These are our picks for most notable campaigns through the lens of product and experience.

A classic battle between competing heavyweights. Popeyes launches a quality product, supported by rabid fans. And then the tweets started flying. Those still wondering who started it can look to this tweet from Chick-fil-A.

Bun + Chicken + Pickles = all the ❤️ for the original. pic.twitter.com/qBAIIxZx5v

Not to be outdone, Popeyes surged ahead and knocked it out of the park with this simple response, fanning the flames for chicken sandwich enthusiasts.

In the end, everyone won, with more fried chicken sandwiches being sold than anyone can remember. Apex Marketing Group estimated Popeyes gaining $65 million in media value, tripling the $23 million media value the sandwich earned in its first few days of sale.

Healthy messaging always seems to resonate well with consumers, so Burger King took the plunge and released the first fast-food collaboration with Impossible Burger—the Impossible Whopper. Almost every food-based media site conducted an Impossible vs. Beef Whopper taste test, and a majority of the reviews came out positive for the plant-based "meat."

In this age of "Man. Vs. Food" shows, the Food Network, and nationally-televised eating contests, a product has to go big to wow potential customers. To that end, KFC decided to partner with Cheetos to create an even crunchier, tastier orange 'finger-lickin' good" sandwich. Available for a limited time, frankenfood enthusiasts could try their hand at the sandwich for four weeks this past summer.

What better way to identify influencers, engage the pubic and create organic publicity than by inviting super-fans to a favorite-brand experience? Museums for ice cream, rosé and pizza merely sparked the trend. Mega food brands now embrace it whole-heartedly.

While this may seem to abandon traditional PR practices, it's really an expansion and investment into those original methods that have always worked. These brands are adding a shiny bow that can be shared on any social media platform.

Upon first look, White Claw might fit better in the Product category, but this summer, White Claw became an experience. Drinkers tweeted about it, and memed it. White Claw was anywhere and everywhere, its supporters were out and proud. The results have been very good for White Claw, with sales up almost 250 percent from 2018, according to Nielsen.

Taco Bell immersed super fans in a destination experience with its hotel. The organic Instagram reach alone was worth the initial investment. "The Bell: A Taco Bell Hotel & Resort" sold out in fewer than two minutes for four nights. Other brands following suit include Howard Johnson and Nutella.

Baskin Robbins has been around since 1945, so it knows nostalgia. "Stranger Things" has been around a couple of years, though it has captured '80s nostalgia to a T. Initially, no one would think to pair an ice cream parlor with a sci-fi TV show. The lesson: sometimes it pays to pair an unlikely duo and ride the coattails of a popular series with a brand that no one saw coming.

This wasn't Rice Krispies' first go-around for designing packaging that caters to children with disabilities. The brand has worked with the National Federation of the Blind to include braille stickers and recordable audio boxes.

Launched during the back-to-school season, when parents are more likely to buy snacks for lunches and after-school, this campaign saw Rice Krispies reaching out to families with autism, introducing sensory "Love Notes" to place in autistic children's lunch boxes. The company created textured heart-shaped stickers made of fleece, faux fur, satin and velour to initiate a comforting response.