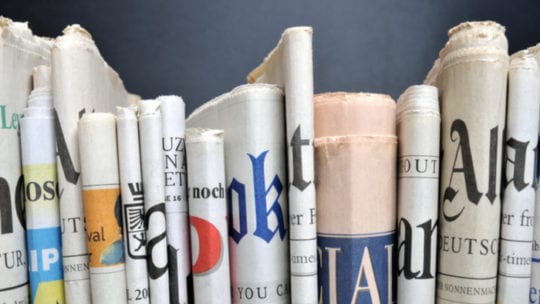 Reading news should be the first thing a PR pro does each morning. It alerts you to events that might influence the companies you represent. In addition, the news is a living text book, particularly for communicators. Below are examples of 2020 headlines that PR pros, young and older, can learn from.

Situation: On January 11, a NY Times headline read, “CNN to Settle Labor Dispute for $76 Million.” The article detailed a dispute between employees and the company that began more than 15 years ago. It hadn't been in the news for years.

PR Lesson: The story is a prime example of this PR maxim: 'Once a company is involved in a PR crisis, it’s in its DNA and can be written about forever.' PR pros who represent a company with a crisis in its past always must be prepared for the negative news to reappear suddenly.

Situation: On January 17, a headline in the Wall Street Journal read, “Panel Backs How FAA Gave Safety Approval for 737 MAX.” The story said a federal advisory board found no fault with the Federal Aviation Commission’s approval of the plane. In addition, it said outside experts found fault with the FAA’s approval process.

Situation: A Times headline on July 13 read, “Trump Aides Move to Treat Fauci as Rival to President.” The article detailed statements that Dr. Fauci made about the coronavirus. The White House said he was wrong.

PR Lesson: One example the White House cited was from a February 29 interview. During it, Dr. Fauci said, “At this moment, there is no need to change anything you’re doing on a day-to-day basis.” But the article, as did other media outlets, noted that was not Dr. Fauci’s full statement. He also said, “Right now, the risk is still low, but this could change.”

Avoid disseminating misleading statements. Once they are fact checked and found false, you are marked. The media will treat whatever else you say with skepticism.

Situation: A NY Times headline from July 20 read, “Weigh the Potential Hazards Before Agreeing to Lend a Hand.” The article suggested that before agreeing to help people, consider how responding might affect their well-being.

PR Lesson: In professional settings, the story says, people should not quickly refuse help requests from co-workers. Moreover, “over-filtering requests based on someone’s seniority today is a very short-term perspective to take,” because a junior associate might be your equal or above.

Still, Anna Goldfarb's accompanying article, “Saying No to What Makes You Uncomfortable,” quotes Dr. Morgan McCain, a psychologist, who says, “The more you practice saying no, the easier it will become.”

Two examples: A colleague once complained to me that the person he reported to always hit him up for loans that were never repaid. And a female executive once told me that her supervisor made her pick up her dry cleaning and bring it to the office. She was afraid to say no.

In both instances, I told the individuals if they didn’t speak up for themselves no one else will. But, I said, if someone treated me like that I would keep a detailed record of the abuses for a month or so. Then I would discuss the situation with their supervisors. If the situation didn’t change, then take it to higher management.

Situation: “Trump’s Unhappy Returns” was the headline in a September 29 Wall Street Journal editorial. It faulted the president for not releasing his tax information in 2016, allowing others to do so in a damaging manner.

PR Lesson: If Trump had released his tax returns before they were leaked it would have given the impression that he had nothing to hide and that everything he did was legal. But there also is an important lesson for PR pros: Do not try to hide negative information. It usually will be divulged, especially during a major PR crisis. Releasing damaging information quickly and at one time will prevent drip-by-drip coverage of the situation and lessen the impression of an attempted cover-up.