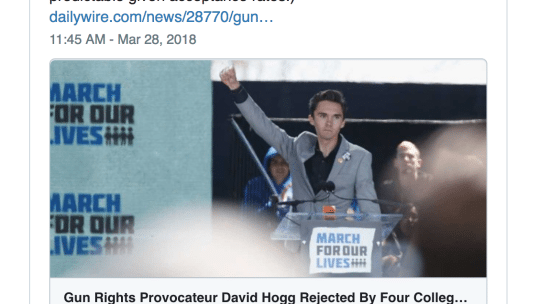 Laura Ingraham, the Fox News host, found herself in hot water after making a remark on Twitter March 29 about a Parkland student who'd advocated for gun control. "David Hogg Rejected By Four Colleges To Which He Applied and whines about it," Ingraham said in the tweet.

On Friday, March 30, Ingraham said during her show that she will take a week-long vacation for Easter to spend time with "my kids." Fox News insists the time off was planned prior to the Hogg event. [Update: During Ingraham's hiatus another sponsor, Ace Hardware, pulled its advertising. Ace confirmed its action April 5. It is the 19th sponsor to pull its advertising.]

Putting the nastiness of Ingraham's initial comments aside, the immediate backlash and quick response are becoming normal. The U.S. public is feeling empowered to use social media to document or talk about a company’s wrong doing, an APCO Insight survey conducted last year found. Roughly two-thirds (62%) of those surveyed said they are likely to post something on social media if they hear about a company doing something they think is wrong. The question for brand communicators: How do you protect your company’s reputation in this fast-moving name and shame environment?

Here are three guidelines for how to prevent a reputation backlash.

The past few months have put Corporate America on alert. The public has become hyper-vigilant in holding companies accountable for all that they say and do and view social media as their “red phone” direct line to corporations. Protecting your company’s reputation is no longer a luxury, but rather it has become a necessity as you never know when the call will come.