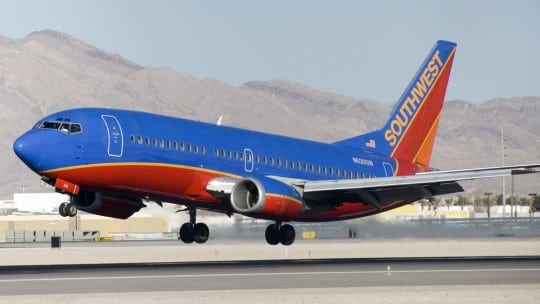 Around 1 p.m. on July 20, 2016, customers started sending tweets to Southwest Airlines, concerned they couldn’t check in online or use kiosks at airports.

By 2 p.m. the failure was located—faulty equipment at southwest.com—and resolved; however, all flight activity had to be halted until key systems could be restored. By 3 p.m. flights resumed with solid indications that recovery was imminent. But was it? Data backlog hampered airline operations for three days.

On day one, airport personnel used manual check-in/boarding procedures while waiting for system recovery. Customers unable to print boarding passes couldn’t travel. The result was lines at ticket counters and gate areas; customers couldn’t be contacted due to issues with our email system.

The technical outage lasted approximately 13 hours before all systems came back. Repairing operational impacts took considerably longer; it was days before Southwest was operating normally—after canceling more than 2,000 flights over four days (of about 19,500) and inconveniencing thousands of customers. The scale of issues was “unprecedented in American aviation,” the Dallas Morning News wrote.

At the heart of this crisis was our biggest challenge: How could we provide targeted communication to customers and employees when our main channels for doing so were down?

One additional challenge: Just hours before the technology outage, our communications team soft-launched the Southwest Community external blog—an expanded, more interactive version of the Nuts About Southwest blog. We had a robust communication strategy for the soft launch, but that changed the moment our website went down. We regrouped with a plan to turn this negative into an opportunity.

Plan for the Unexpected

We regularly review crisis plans and conduct drills to prepare for a variety of situations. Our crisis communication objectives are: Demonstrate success in responding to the issue and our concern for anyone who may be affected; defuse conflict or controversy; and reduce pressures facing Southwest Airlines as a result.

Business objectives in a crisis include: Preserve our reputation and brand; protect the business by operating safely, maintaining service quality and consumer confidence/loyalty.

On July 20 at 3:15 p.m., we provided leaders with the first of many listening/measurement reports about the situation.

We use a Potential Operational Problem (POP) method. POPs provide updates and a forum for discussion. They were set into action immediately. Throughout the next few days, Southwest leadership activated on 17 POP calls. These calls informed the cross-functional team about communications needs and helped determine next steps.

Even with POPs, it took our 63-person communications team weeks to work through crisis-related efforts.

Initially, communication strategy focused on informing customers of the outage without an ability to send messages via email, text or phone, since these systems were impacted.

We also quickly recognized the need to focus on the internal crisis, as employees were significantly disadvantaged since they, too, were unable to get to their final destinations.

Strategy drove tactics, which focused on keeping employees, customers and media informed early and often on not only their preferred channels, but also new platforms.

Key internal and external messages fell into categories: 1. How Southwest employees were processing travelers during the outage and providing crucial information for travel. 2.Traveler and crew reaccommodation and aircraft repositioning in the days following the outage. 3. Apologies and make-goods for employees and customers.

We wanted to make sure to strike the right tone, in the right place, at the right time. Leadership was quick to apologize to customers and thank employees, who were not only trying to figure out how to do their jobs, but also doing their best to accommodate stranded/delayed customers.

Externally, we leveraged Southwest’s social media properties. The Social Care Team had all hands on deck to quickly respond to customer inquiries coming in through multiple social media accounts. Customers reaching out to us hourly equaled what we see during an entire day.

Customers were frustrated, but appreciative of quick information. Southwest mentions accounted for more than 48% of all airline conversation on social media from July 20-27.

Our three Facebook Live videos reached more than 4 million people. We experienced a 273% increase in video views on Southwest’s Facebook page that week, compared to the previous week. There was a 43% increase in @SouthwestAir mentions that our Social Care Team handled. New Facebook fans on July 20 grew 3,500+, compared to our average of 1,500 daily.

Customer Relations fielded 55,000+ emails and phone calls. The Brand Monitor Survey showed brand commitment took a hit during the outage…but core customers remained loyal. There was a temporary drop in Net Promoter Score, but it rebounded quickly following the crisis.

Our plan to drive engagement on the Southwest Community blog the day of launch was unnecessary, as we utilized it to communicate messages about the outage, which ultimately led employees and customers to become early adopters.

As customers discovered the new Story Submission Form functionality, positive stories of employees going above and beyond arrived. We repurposed them into testimonials. Make timing work with you, not against you; seize the opportunity. 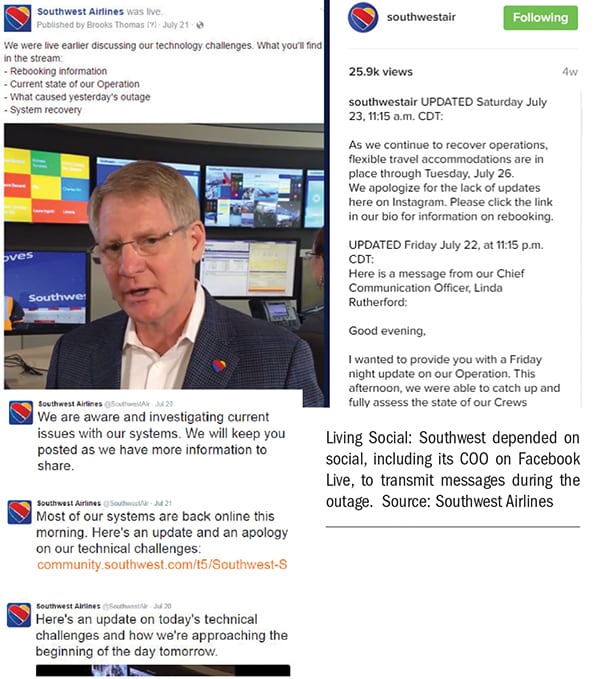 Hindsight is 20/20 and there always is room for improvement. With our omni-channel approach, we leaned heavily on social channels—Facebook, Twitter, LinkedIn and the Southwest Community. If we could get a do-over, we would use Instagram earlier. We chose not to, since we typically use it for visual storytelling and disseminating visual information. So, naturally, Instagram wasn’t top-of-list as a customer-service platform. We soon recognized that was an oversight. It was decided to test it as a source to issue travel advisories.

Instagram could have provided an additional source of information for customers and employees and guide them to Community or the Facebook page for more information.

Our collective reach was in the millions and we saw spikes in positive sentiment. We’ve been recognized for being the first company to utilize live streaming to communicate during a crisis.

We turned to Facebook Live to satisfy multiple needs: First, to answer the numerous media inquiries coming into SWAMedia.com. Facebook Live allowed us to triage media inquiries, control the message, show sincerity and give everyone the same information at the same time. Second, we had a social need to connect with customers (whose mentions were now piling up into the tens of thousands).

We didn’t have much information that first night when we went live from our social media listening center, other than we were in the process of drawing down the operation. Being open about that, coupled with visible emotion during our first Facebook Live video, gave us the first indications of positive sentiment. People were upset with us, but they were met with an apologetic face, delivering a very authentic message.

In the morning, we decided to go live a second time with our chief operating officer. From the first stream, we learned we needed to lead with the most actionable info for travelers before examining the cause and its fix. Then, we needed to explain why—despite a cause being in place—it was taking so long for operations to recover.

We saw another boost in positive sentiment and a slight lull in Social Customer Care mentions. Let’s be clear—volumes remained unmanageable, but customers appreciated the information, transparency and humility.

When it was determined we weren’t reaching quite as many people as hoped, we boosted this stream with paid media. This was the only budget used in this crisis response, and cost $14,400.

All Hands on Deck

When you’ve planned for the unexpected, key players know their roles. But, as the crisis drags on, the team will need support and rest. Activate your entire team and designate clear roles.

“Tell it all and tell it fast” isn’t easy when you’re dealing with a complex issue that’s evolving as you speak. In the rush to get out information, don’t speculate. Give frequent, factual updates. Note: Quickness can sometimes be the enemy of accuracy. Tell the truth about the situation and get to the why behind it to the extent that you can. Explain the cause, the effects and what you’re doing to make it right.

There likely won’t be a communication plan on paper (or time to create one) when you’re in the thick of it. Strategy is evolving, too. To remain consistent and bring organization to the situation, document every single touchpoint. Southwest used approximately 160 forms of communication tactics over a four-day period. We believe our careful records will be invaluable as we plan and drill for future emergencies.

Be human. Raw emotion and genuine concern are key, and should show in your messaging. Make sure customers and employees know you recognize what they’re going through.

Find a way to leverage every available channel. In the heat of the moment, it’s hard to think beyond your typical, go-to, “safe” channels. You should. We had never used Facebook Live, but this was definitely the right time to take that leap.