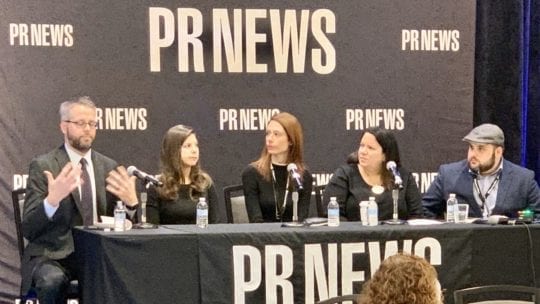 The panel agreed that establishing your messaging goals before starting an account on a new platform is the best place to start.

“What is my business goal? Who am I trying to reach? Where can I find these people to access my story?” asked Smith, explaining that identifying an audience that may or may not click with your brand for these platforms is essential.

Arolfo said that PBS works hard to figure out how to engage audiences on emerging platforms. While the legacy organization's median age on linear TV is 65 to 70, there remains a younger audience to be found on digital platforms like YouTube, Twitch, IGTV and Facebook Watch.

“(We ask) is there a potential audience to build there,” he said. “The platform has to prove itself, that there IS an audience there, that what we can get what we want as PBS on this platform. It has to show us that there are consumers there, then we will start putting resources there and adapt.”

Once an audience is found, and a platform deemed worthy, the panel also agreed that content strategy must take a multi-channel approach, which can get the attention of the media.

“Engaging new media is not a one-and-done approach," Smith said, "it’s part of a whole strategy. Have something on social, as well as owned channels, and work with the appropriate media that focus on those platforms.”

Katina Arnold explained that ESPN's communications team changed its strategy to include a 360-degree content approach. The professionals think about what video component to use, or what photos they may need.

“At ESPN, sports fans are some of the first to embrace and adapt to new technology,” she said. “It’s important for us to be there. PR in general was never just about the press release. There is always going to be a place, but we just have more options now. We have weekly meetings to talk about upcoming news of the week. [We also have] daily huddles to talk about the news of the day and talk about outreach for that particular piece of news.”

Axios' Sara Fischer, meanwhile, explained that audiences are quicker to adopt new platforms than corporations. On a recent Facebook earnings call, she found out that most user engagement is happening within Stories. That said, FB is struggling to get advertising messages alongside stories, mostly because businesses have yet to learn to create content for this facet of the platform, which provides a huge challenge.

Fischer noted that monetization of new media content can take a backseat for some corporations. The brands that do figure out their multi-channel new media niche, however, may be sitting on their next audience goldmine.

“I think about podcasting,” she said. “It’s only expected to bring in $720 million as a medium next year, while TV is at $72 billion."

Fischer cited The Daily Beast as an example of a company that's investment in a new platform to reach a new audience may have initially furrowed some brows, only to produce results have proved worthwhile.

“Many businesses that rely on one type of revenue find that the best way to insulate themselves is to diversify revenue,” she continued. “The Daily Beast membership program is an interesting example. It’s not the same as a subscription. The Beast was not just saying it wanted subscription revenue, but that it was going to invest more in readers through membership. And that is a conscious choice. It means to put up more cash up front to develop a closer relationship with events and exclusive content.”

Even for what seems like an old-school, legacy station, PBS followed a digital-first pattern when looking to update its traditional TV membership telethon.

“How can we translate the same info on the broadcast side, and make that for digital audiences?” Arolfo asked. “These new audiences aren’t used to our telethons, so how do we gain support? That’s the switch of mentality, it’s no longer a telethon, but now a crowdsourcing campaign—Patreon. We use it much in the same way the 'viewers like you' (campaign) gives 10 to 12 bucks a month, now we’re just using digital tools to switch it.”