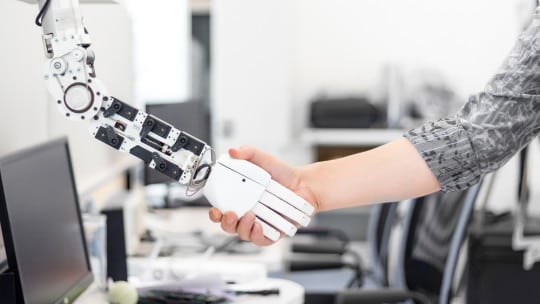 Discussions about artificial intelligence (AI) invoke blank stares or robot take-over fears. We’ve created a caricature that inhibits real conversation and actually diminishes what AI is already doing for us in our everyday routines. Think about it. It’s Spotify or Pandora choosing our next song; it’s Google crawling the internet for the best search results; or it’s Amazon suggesting the best thing to buy. In other words, the robots are already here.

Hollywood has fun scaring us with world-dominating machines whose mental capacity grows well beyond any human's, but the reality of AI is, it’s been the not-so-scary backbone of innovation for decades. Technology writer Om Malik explains AI as “augmented intelligence” that “offers the possibility of winnowing an increasing number of inputs and options in a way that humans can’t manage without a helping hand.” So, as data gets more and more unwieldy, AI is the power that helps us tame it.

That definition also puts into perspective several of the companies and products you interact with everyday, but in PR, we’ve been quiet on the conversation of what AI can do for our us.

PR and AI rarely are mentioned in the same sentence. In fact, fewer than 3% of news stories that discuss the PR industry also mention AI.  But AI isn’t going away. McKinsey predicts AI will touch every industry, with as many as 45% of tasks currently performed by people being automated using existing technologies. And for the PR mainstream, the technology is starting to catch up.

The idea of AI in PR is the same as in other industries that rely on it. Software takes the commands given it, analyzing incredible amounts of data, and making decisions or producing reports. Yes, this research and analysis has been done in the past without software or AI, but PR measurement technologies tout reductions in time spent reporting by almost 75%!  And it doesn’t stop there. Just as you see suggested products on Amazon or search terms in Google, PR tech now takes in data and uses it to give suggestions for next steps.

But there is no lack of work for today’s PR pros, because it’s far from all robots.

As you go deeper into AI-backed products, you realize the human element is critical. Human acumen combined with computer intelligence can be the most effective scenario. This is called intelligence amplification (IA). You’ve probably heard that a computer beat the world’s best chess player. That was nearly 20 years ago, but it was not the end of the story. The new reigning champion is neither human nor machine. It is, in fact, a human assisted by a computer.

It’s the same idea with PR analytics; the output doesn’t tell the right story until someone gives it the parameters to investigate and evaluate. It’s the idea that even as Spotify curates your playlist, you have to give it structure, tell it your likes and dislikes.

So, what is the PR pro to do? Embrace technology.

OK, I hear your argument. PR is different than marketing (where CMOs spend more on technology than CIOs). AI innovations don’t look the same in this industry because PR is more art than science; people and relationships are the dominant forces here.

That will never change. The human touch always will dominate PR programs and campaigns. But back to the concept of IA, imagine having access to tools that not only alert you when your competitor is getting an abnormal uptick in coverage, but suggest your next moves. As Amazon says “Customers who buy this also bought this….” You can leverage data to make your next PR move more powerful, or receive a suggestion about a move you didn’t even know you needed. Your PR software won’t stop at pretty reports and media contact lists; to be effective, it’s going to use AI to help you excel in the next frontier of PR.

Think about AI in a new way, in a way that augments PR. The fascinating thing about AI has been the mystery surrounding it, and the fear that it’s coming after our jobs. The real story is that it’s already here -- changing the way you listen to music, search the web, and digest news. And as for your job, new technologies, software, and innovations in PR are working to give the PR pro more power in an industry that has yet to see this kind of human and machine interaction. Inevitably, as PR pros begin to harness the power of AI to enhance their work, you’re going to see a divide in the industry. And in taking notes from what technology has done for marketing, PR pros have to be on the tech side of change.