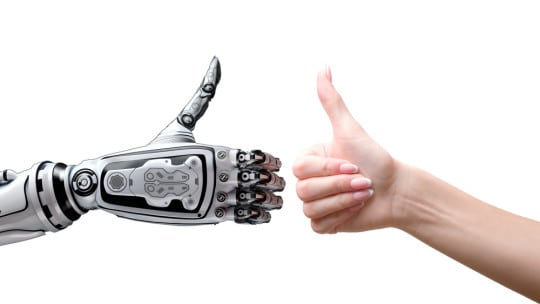 As Mad Men’s Don Draper once counseled, “If you don't like what's being said, change the conversation.” Just beneath the surface of the American workforce lurks the fear that artificial intelligence (AI) eventually will replace many workers. In some cases, it’s more than a theoretical concern.

As a senior communicator for a brand whose business sits squarely in the AI space, IBM’s Jon Iwata, SVP, marketing and communications, has an informed viewpoint to bring to this conversation. In short, it’s that communicators should embrace, not fear, AI as it will help them do things they lack the capacity to undertake themselves. AI will be the “cognitive communicator’s” friend and helper, Iwata suggests, allowing communicators to take advantage of the voluminous data available to target messages with even more specificity than is done today.

To put AI into context, Iwata says, consider the friendship between it and humans as embodied in the lovable robot R2D2 in Star Wars, rather than the notorious sentient computer HAL 9000 in 2001: A Space Odyssey. (Trivia: HAL’s name was said to ape IBM as each of the 3 letters in its name precede I, B and M. Co-screenwriter Arthur C. Clarke denied this.)

Iwata's keynote at the opening of the 2017 International Association of Business Communicators conference June 12 in Washington, D.C., contained myriad examples of what he clearly wanted to portray as the benign, helpful nature of AI, a partnership between technology and humanity embodied in IBM’s supercomputer Watson. You know Watson—it’s the machine with a friendly, human voice that destroyed a pair of champions on Jeopardy! a few years ago.

The Jeopardy! example played a large part in Iwata’s presentation actually. He began by explaining and showing how difficult initially it was for Watson to answer Jeopardy! questions. That was a good segue for Iwata to show a video of the IBM scientists who developed and trained Watson reacting to the machine’s victory at Jeopardy! Forget about the good PR it brought for Watson, the video also brilliantly made the scientists into highly relatable human beings, whooping it up as their “boy” slowly gained on Jeopardy! champs Ken Jennings and Brad Rutter and eventually overwhelmed them.

The video also helped remind Iwata’s audience of the point that Watson needs human input and training to accomplish things, which certainly helped lower the blood pressure of the 1,000 or so human communicators listening to him at IABC.

Better than a human? Iwata preferred to portray Watson as a human-like or at least human-trained entity that needs no sleep. Indeed, one of the factors that Watson brings to the table is its (his?) ability to work and focus at peak efficiency 24/7. So those 72,000 pages of tax regulations and the endless pages of medical journals can be ingested continuously. The mountains of data that frenzied communicators have to work weekends and evenings to analyze, well, Watson can do that for you while you’re at home relaxing.

Will AI and robots take human jobs? Iwata chose not to address that question in much depth.

So, not to worry, AI is your friend. (Is that the truth or the excellently packaged argument of a superior communicator whose brand is relying on AI to butter its bread?) Check back here in 5-10 years. Sorry, I’m not about to train Watson to answer this question.