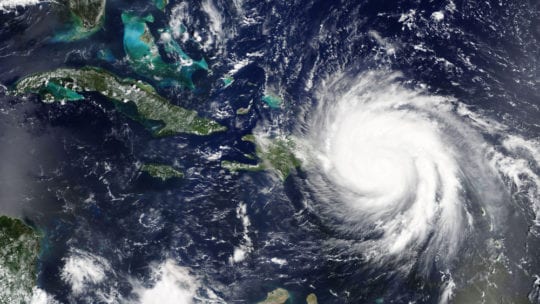 While those on the mainland celebrated Labor Day, Hurricane Dorian ravaged The Bahamas, leaving five dead as of this writing and the fate of those on smaller islands still uncertain. As the storm barrels toward Florida today, there may be no clearer reminder that summertime officially has ended.

Growing up in Miami, hurricane season meant making sure that all repairs on the house were done by this time of year, that our pantry was stocked with canned goods and that there were extra batteries on-hand. Grocery stores, hardware stores and gas stations, meanwhile, greet the season with advertisements that straddle the line between providing a service and stoking community panic.

PR pros can learn much about messaging during hurricane season, from how to communicate in a calm, measured tone to what language should be avoided. Those affected by a storm may lose reception in the thick of it, but a sound strategy during prep and recovery efforts can go a long way toward helping people withstand, and, if necessary, rebuild.

The Good, Bad and Ugly of Realtime Communication

Due to Hurricane Dorian, we continue to update the hours of our stores. Updated list: https://t.co/zjqYbS4dKY pic.twitter.com/EIQjF5hNnf

The popular southern supermarket chain Publix plays a crucial role in hurricane prep for millions. As such, it has whipped up a clean and straightforward landing page that customers can access via this link. The image above also instills confidence that the chain was prepared enough to construct a simple graphic, along with a graphic on the landing page itself. This page also links to an employee assistance hotline, showing internal and external stakeholders that Publix has everyone's concerns in mind.

Some airport communications have been less than impressive, however. While Miami International Airport gets points for sharing its graphic in English and Spanish, its formatting requires users to click through the image in order to read the whole thing—not ideal for those with dodgy connections in bad weather.  In addition, the image of lightning in the background does little to inspire calm or measured behavior.

Most businesses and transportation organizations seem to understand that less communication can be more in times of a disaster. By avoiding flooding people's feeds, you ensure that crucial information is not buried or lost, and that only vetted, wholly accurate information reaches the audience.

Alas, that's rarely President Trump's preferred cadence on Twitter. "As Dorian approached, Mr. Trump switched into town-crier mode, updating the public on what he had learned — or, what he thought he’d learned — from government officials as Dorian threatened the coast of the state of Florida, where he has owned property for decades," The New York Times reported. President Trump went on to claim that Alabama would likely be hit. The National Weather Service corrected him.

Those on or near the East Coast who want real-time storm tracking updates would do well to follow The National Hurricane Center, a Miami-based institution that focuses on the Atlantic Basin.

The Power of True Community

Local brands like Publix thrive in times of disaster because they are trusted community hubs. Customers know they can find not only products, but services, to help them weather the storm. At its best, however, social media can fill a similar role as a gathering place.

Since Dorian ravaged The Bahamas, organizations and residents are turning to social to connect with resources and find loved ones.

A state representative in Florida shared a video of his family in The Bahamas on Twitter that let anyone watching know just how dire the situation was.

Video from my family in the Bahamas ??— -#Bahamas pic.twitter.com/Kbp8a7J5F2

As a result, Jones told The Times that he planned to bring "20 to 30 people from South Florida to The Bahamas to join the search and rescue missions." This video was a powerful, visceral way for Jones to help recruit able bodies for aid missions.

For those in The Bahamas seeking their loved ones, Facebook Groups provided a necessary digital hub. “ 'Checking on Capt. Plug and Debbie and family? Any news?' wrote Sean Fletcher to the Facebook page of a volunteer fire and rescue unit in Hope Town, a settlement on Elbow Cay, an islet in the Abaco Islands," reported The Times.

"'PRAISE GOD!' exclaimed Karen Huff-Lowe in a post to the Facebook page of the Hope Town Bulletin Group. 'I just got confirmation my family, Robert, Mercedes, Bessie and Maity are all O.K. They think everyone else on the island is too, but communication limited.'"

These stories should remind us that clear, timely communications does not always pertain to PR and marketing—sometimes accurate communications can be a matter of life or death. Social networks can be about far more than paid initiatives and chicken sandwich feuds—when used properly, they can also help bring people together and get those in peril the help they need. It's on us to make sure that they are used properly, though, with clear, calm and timely messaging.