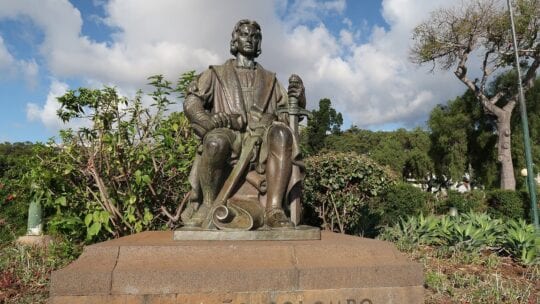 Christopher Columbus could use a new PR campaign.

Far from the elementary school stories of the famous explorer discovering the New World, many Americans are conflicted supporting Columbus Day after learning about the suppression of Native American peoples.

79 percent of students surveyed support replacing Columbus Day with Indigenous Peoples' Day, according to a new poll from College Pulse, a data and survey analytics company.

Brands and organizations seem to be acknowledging this trend and embracing Indigenous Peoples’ Day to honor the tribes that populated the frontier of America.

We looked at campaigns acknowledging both holidays today, and some taking the next step and promising action to support Native Americans.

Never one to be a shrinking violet, the ACLU led the charge to promote a blunt message regarding its stance on Indigenous People’s Day.

Today, we honor the culture, heritage, and resilience of our Native American communities.

The Texas Observer took the day to announce a newsroom initiative promoting more coverage of the Native American community—the introduction of the Indigenous Affairs desk.

For whatever reason, news organizations in Texas don’t report on Indigenous communities. The @TexasObserver intends to be different: we're launching an Indigenous Affairs desk because every day is #IndigenousPeoplesDay. https://t.co/E9Kw8cNoj3

Patagonia, known for its work with the environmental community, produced and shared a video of The Gwich’in tribe, who have been fighting for decades to protect the Arctic National Wildlife Refuge.

“I'm not an activist, I’m not an environmentalist. I’m just trying to protect my children’s birthright." - Bernadette Demientieff of @OurArcticRefuge https://t.co/li4aScLGPC#ProtectTheArctic #IndigenousPeoplesDay

Even Vogue found a way to weigh in, featuring a fashionable take on the holiday, showcasing Indigenous brands.

Today is #IndigenousPeoplesDay, and there’s no better day to get to know a few Indigenous brands. Here, 16 striking pieces from Indigenous-owned brands. https://t.co/onyr8SIQpV

It’s definitely noticeable that many brands shied away from commenting on Columbus Day, what may now be deemed a controversial holiday, as campaigns were few and far between.

The First Lady, Melania Trump, shared a White House proclamation about the greatness of Columbus Day.

Happy #ColumbusDay! Today we celebrate the history & diversity of our country & all who have contributed to shaping this great Nation. https://t.co/3vStc4ep6r

As many Italian-Americans see Columbus Day as an Italian holiday, the National Italian American Foundation shared history regarding the genesis of the celebration.

This is an important & historic holiday for #ItalianAmericans, the 5th largest ethnic group in the US. When #ColumbusDay became a federal holiday in 1937 it provided a sense of dignity in light of the hostility and discrimination many Italian immigrants & Italian Americans faced. pic.twitter.com/lQ3OOkStLF

The History Channel took the opportunity to teach a lesson about the arrival of Christopher Columbus, as well as the importance of Native Americans inhabited here.

Years before Christopher Columbus stepped foot on what would come to be known as the Americas, the expansive territory was inhabited by Native Americans. #IndigenousPeoplesDay #ColumbusDay https://t.co/awsVXCfkfZ

And for some, well, they chose to take the middle road, and let the public decide. This realtor decided to promote Columbus Day and Indigenous Peoples’ Day.