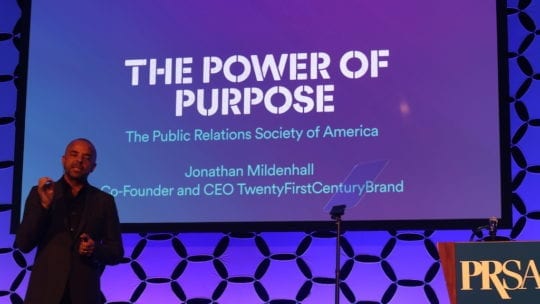 This past Sunday in Austin, Texas, with the Austin City Limits music festival down the street, the PRSA 2018 International Conference kicked off its programming with a rock star of its own. After a stirring rendition of The Star Spangled Banner by UT Austin's Mariachis Paredes de Tejastitlán, the first general session of the conference began.

Jonathan Mildenhall, President and CEO of TwentyFirstCenturyBrand, spoke extensively about his greatest wins during his time as a marketing leader at Coca-Cola and, more recently, as CMO of Airbnb.

Mildenhall explained how his mother taught him and his brothers the importance of being purposeful in the choices you make to ensure you get the meaning from life that you want. "And so from a very early age, I have been steadfastly obsessed by this notion of purpose and how I can be clear in my own purpose, how I can work for companies that are really clear on their purpose, and how I can but purposeful marketing out there into the world," he said.

He acknowledged that it takes no more than five minutes on Google to find loads of statistics about how much better companies with clearly stated purposes perform—including financial metrics, consumer metrics like loyalty, frequency and advocacy, and employee metrics.

"It's becoming increasingly important for the millennial and Gen Z audience, who are always looking behind the marketing narrative at the purpose and the intention of companies and brands that they engage with," said Mildenhall. Here are some of key tips from his keynote for brands looking to define that purpose.

Spell out your values. Mildenhall identified "humanity" and "creativity" as two incredibly important values to him, "the guardrails of every decision I have made throughout my career. These values are the foundation of my purpose, and if I find myself in a work environment, or a social environment, where I feel that my values of humanity and creativity are being compromised, then I have to make the decision to change that particular circumstance."

Mildenhall recommended that all attendees think about what their own purpose might be, summarized as two or three values that he says can become an "editing filter" for the work that they do, and more importantly, "the way that you show up as a human being." The main thing, he says, is staying conscious of them.

Those values will only get enhanced during a crisis. Those values come in handy, because if you figure them out beforehand, they will stand up to whatever storms may befall your brand.

While at Airbnb, Mildenhall worked hard to foster an inclusive culture, for both employees and end-users. But when a transgender guest was denied a stay at one of the properties listed on its platform, and as they found that their black customers were being approved to stay in homes at a much lower rate, Airbnb realized that much of the purpose-driven marketing about a world where "anyone can belong anywhere" was threatened by certain small-minded tenants.

These insights led  Airbnb to work with former Attorney General Eric Holder and compose mandatory  guidelines of community inclusion in 2016, requiring that anyone listing their homes on its site must commit to renting to guests of every background, and not deny anyone a stay on the grounds of race, gender, religion or sexual orientation. For those who didn't follow these guidelines, there was a zero-tolerance policy, and they would be permanently banned from listing on, or using, the platform.

Mildenhall's takeaway from this experience was simple: "You can turn crisis into a real opportunity to state your values."

Mildenhall learned that Coca-Cola has always positioned its brand as the antidote to modern life, not just as a clever catch phrase, but through its actions. It was then that he discovered a seldom-told story: After Dr. Martin Luther King, Jr. was assassinated in 1968, Coca-Cola flew its corporate jet to Memphis to retrieve Dr. King's body and bring him back to Atlanta, where both the late civil rights leader and the super brand hailed from. Coca-Cola also agreed to pick up all expenses, including military and police, to give Dr. King a statesman-like funeral.

"Although there were riots that weekend, the worst riots across all big cities in the United States," said Mildenhall, "there wasn't in Atlanta, because the African-American community saw the city grieving with them."

Mildenhall said that after MLK's funeral, Coca-Cola's senior leadership team got together and acknowledged it was not doing all that it could to ease relations between races. This led to 1969's "Boys on a Bench" advertisement, which showed black young men and white young men sitting together on a segregated bench, and the power of this iconic photo would resonate to this day. In 2013, Mildenhall and his team used it as inspiration for a campaign aimed to position Coca-Cola as a connective bridge amid the long-waging hostilities between India and Pakistan.

It was a purpose-driven initiative with positive social impact—and one Mildenhall would not have been inspired to start, had he not studied up on the legacy of the brand that he worked for. This, he emphasized, is why brands should lead with purpose—not only because it drives performance, but because it ensures the right kind of growth, is grounded in history and makes the communications personal to your audience.