Winner: SKDKnickerbocker for the Respect for Marriage Coalition - The Opportunity for Historic Change: Building National Support for Marriage Equality 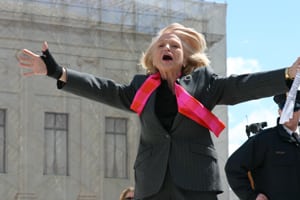 In December 2012, the U.S. Supreme Court announced that it would hear arguments in United States v. Windsor, a case challenging the federal Defense of Marriage Act, and Perry v. Hollingsworth, a challenge to “Proposition 8,” California’s ban on marriage for gay couples. The nation’s largest LGBT advocacy organizations recognized that they needed a coordinated national media campaign to complement their efforts.

To do this, they formed the Respect for Marriage Coalition, a partnership of more than 80 civil rights, faith, health, labor, business, legal, LGBT, student, and women’s organizations working together to end DOMA and increase nationwide support for the freedom to marry. They approached SKDKnickerbocker, which developed a strategic plan that included informing the debate through D.C. elites and creating a positive climate of media coverage around marriage equality. Then, between arguments and decision day, the firm showcased loving, committed couples and their families who hoped that the Court would “do the right thing” in earned and paid media placements.

The efforts paid off. A June 2013 Pew Research Center found the media had overwhelmingly presented a supportive view of marriage equality. Over the course of the campaign, SKDKnickerbocker team placed 30 op-eds from families and influential allies, including Republicans, faith leaders, and military officials; secured over 120 print, television, and radio stories highlighting the bipartisan support for marriage equality, including the New York Times, The Wall Street Journal, USA Today, Washington Post, ABC, NBC, CBS and Fox News among many others.