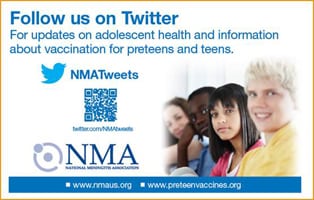 The National Meningitis Association (NMA) was founded by parents whose children died or suffered from meningococcal disease, also called bacterial meningitis. NMA educates the public, healthcare professionals and others about meningococcal disease and its prevention. The objectives of their Twitter campaign were to extend the reach of NMA’s key messages to appropriate audiences on Twitter and engage stakeholders in meningitis prevention efforts by using Twitter more effectively.

NMA’s biggest Twitter challenge was the narrowness of the topic and the need to take great care in messaging to be medically accurate. With the aid of Alembic Health Communications, a tiered approach was implemented using broad categories to identify and follow potentially interested users. NMA also followed authoritative accounts to prepare for influencer engagement. NMA issued 8-10 tweets per day with a steady stream of valuable public health messages and news stories, including information about meningococcal disease, adolescent vaccines and other related health topics. Content was supplemented by pre-scheduled tweets featuring stories from NMA advocates and disease and prevention messages. Tools on the server supported these activities and were used for ongoing assessment that informed adjustments to messaging and processes throughout the campaign.

By implementing a carefully planned and managed system and broadening and enhancing its content, NMA exponentially grew its Twitter following and increased its message reach and delivery capacity. Its follower base more than doubled from Nov. 2012 to Nov. 2013, with an average of 25 new followers daily. By using Twitter more effectively, NMA has engaged many influential stakeholders who share its messages with their followers.