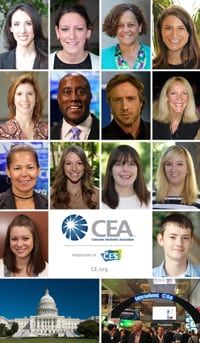 The consumer electronics industry has been committed to green and sustainable practices for more than two decades. The CEA’s 2013 Sustainability Report, which was released last September, neatly tied all these various efforts together in order to communicate how the CEA benefits the public, businesses and organizations. Indeed, the report summarizes and illustrates how the CE industry is delivering products that are more energy efficient, less resource-intensive and more recyclable. It focuses on green packaging, greener designs and how there are fewer environmental impacts at the annual Consumer Electronics show, which in 2013 drew more than 150,000 people.

To ensure the report was an added value, CEA worked with Corporate Reports to gather stories and case studies from its member companies, which helped draft and approve the content. CEA promoted the report at industry events taking place in Washington, D.C.; distributed press releases and plugged the report via its social media channels. CEA hoped to garner at least eight earned media hits, including a national publication, to coincide with the release of the report. Yet the PR effort exceeded that goal, with 11 earned media hits, first and foremost coverage in Politico (considered a bible for the Beltway class). What is more, in the first two months following its release, the online version of the report attracted 750 views. CEA continues to highlight the report in all environmental communication items and policy meetings.