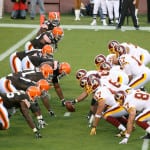 In early March, Washington, D.C.’s NFL franchise found itself the subject of scorn. The team fired its general manager a bit more than two years into a four-year contract, despite the club’s improved record on the field after years of futility. In an article covering the firing, the Washington Post quoted a statement from the team’s president wishing the ousted general manager “well in his future endeavors. The team will have no further comment on his departure.” What happened next turned into a PR fiasco.