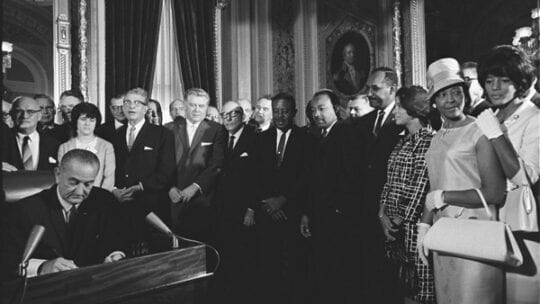 Today marks an important date for not one, but two points in history. It is the 55th anniversary of  when former United States President Lyndon B. Johnson signed the Voting Rights Act, as well as 75 years since an atomic bomb dropped on Hiroshima. Both of these occurrences provoke conversation as well as thoughtfulness in regards to historical context.

How an organization honors a divisive historic event coincides with the needs of its audience.

For Sandy Hook Promise, a national nonprofit organization founded and led by family members whose loved ones were killed at Sandy Hook Elementary School in 2012, the date of Dec. 14 never loses its significance, and is treated gently. Aimee Thurnberg, communications director for Sandy Hook Promise, suggests using the term “remembrance” rather than “anniversary” to showcase respect.

“This [term] strikes a more solemn tone; it's less celebratory  than as an anniversary is meant to be,” Thurnberg says. “As we commemorate these remembrances, it's very important to honor the individual lives "taken too soon" (versus "lost") by tragedy and humanize these historic, large-scale events by talking about the victims and sharing their stories.

Thurnberg also notes that providing a call-to-action resonates with supporters.

“We also find it is really helpful to give people an action they can take to honor these lives, educate themselves on issues surrounding these events, and ultimately prevent future tragedies from happening,” she says.

Coinciding with an election year and the death of social justice warrior Rep. John Lewis, the remembrance of the signing of the Voting Rights Act, 55 years ago today, holds even more significance. Some organizations like the Smithsonian are using the day to deliver historical artifacts to remember this event.

#OTD in 1965, Pres. Lyndon B. Johnson signed the Voting Rights Act to enforce the 15th amendment of the U.S. Constitution. #APeoplesJourney pic.twitter.com/jKQbRZR5FP

For others, like the organization When We All Vote, a nonpartisan organization committed to voter registration, it’s a time to honor the historical context to provoke action.

Stephanie Young, the group’s chief officer of culture, communications and media partnerships, told CNN about the importance of the date in regard to its audience.

“The anniversary of the Voting Rights Act reminds us that even though we are grappling with the coronavirus pandemic, police brutality and racial injustice, we are reminded of the sacrifices of people like John Lewis and his peers, and encouraged to stay in the fight to help every eligible voter get registered and ready to vote," Young said.

APCO director, Jason Meyer agrees that acknowledging such dates must delicately combine historical context and the context of the current time.

“It’s about making these really important periods relevant to what we’re experiencing today,” Meyer says. “That type of tone makes this sort of acknowledgment much more compelling and resonant with audiences.”

For sensitive topics, it’s important for messaging to be honest and acknowledge what did happen. A remembrance of Hiroshima is not a celebratory memory, but it is important to acknowledge, particularly for the benefit of younger generations who may be farther removed from the story.

"We have a shared responsibility to look directly into the eye of history and ask what we must do differently to curb such suffering again."

For many organizations, acknowledging Hiroshima also encourages a call to action—reminding leaders to renew efforts to ban nuclear weapons.

The UN joins the world in marking 75 years since the atomic bombing of Hiroshima.

On the 75th anniversaries of the nuclear attacks on #Hiroshima and #Nagasaki, we’re calling on global leaders to work toward a world without nuclear weapons.

Global #NoFirstUse paves the way to the total, verifiable elimination of all nuclear weapons. https://t.co/BaM1XC40G4

It’s important to read the audience when observing a divisive date in history and to strike a chord with those who appreciate the support, as well as those who will appreciate the learning experience.