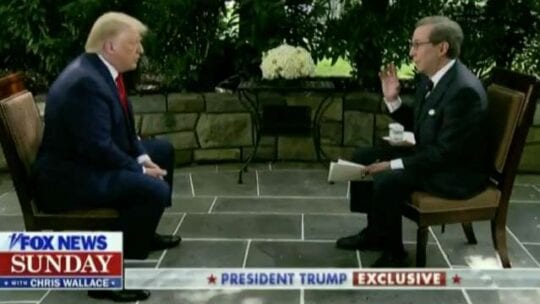 Much of the conversation surrounding the Sunday Morning talk show circuit focused on a much-hyped exclusive interview featuring President Donald Trump and Fox News host Chris Wallace. Many applauded Wallace’s polished demeanor and skillful navigation of a conversation with the president on difficult topics, especially given Trump has not hidden his dislike of Wallace in the past.

.@SteveScalise blew the nasty & obnoxious Chris Wallace (will never be his father, Mike!) away on Chris’s lowest rated (unless I’m on) morning show. This kind of dumb and unfair interview would never have happened in the @FoxNews past. Great job Steve!

Others believed the interview maintained Trump’s immovable stance on his core issues. Gene Grabowski, partner at kglobal, said for some it’s hard to determine what the interview would accomplish.

“It’s hard to say what the president’s goal was in participating in the interview with Wallace,” said Grabowski, partner at kglobal. “The one thing he did accomplish, however, is demonstrate that he won’t back down in the face of criticism or uncomfortable facts. He also stubbornly kept presenting his messages, albeit in a disorganized way.”

Regardless of the viewers’ opinions on the interview, it did provide several points of instruction for media training. Whether they are working with an executive, small business owner or the president of the United States, it’s important for communications professionals to prepare not only themselves, but their spokespeople, to the best of their ability. Here are some overarching lessons from the interview.

Be prepared with specific facts on all likely topics. The more precise and example-oriented you are when answering, the more knowledgeable and trustworthy you appear (see Dr. Anthony Fauci). At one point in the interview, Trump interrupts Wallace and calls on his press secretary to bring him a specific number on the COVID death rate, which hampered the flow of the broadcast.

In a recent PRNEWS article, PR veteran Arthur Solomon offered this advice for media interviews: “Reporters love statistics. Include them in your answers.” However, if you are lacking with the correct answer to a question, instead of freezing or lying, it’s also OK to say, “I have to check on that and get back to you,” he said.

Answer directly. Reporters and viewers appreciate experts who provide direct answers to questions rather than talking around a question with filler. The president did the latter on several occasions during the interview.

“Trump failed to answer–or even address–several direct questions from Wallace before going off on rants about Joe Biden and the Democratic party,” Grabowski said. “That violated two basic tenets of media coaching: 1) Listen to the question and address it ‘bridging’ to your message and 2) have a message to bridge to.”

Keep the upper hand with politeness. Ever try watching one of those cable-news talk or sports shows where pundits continually talk over each other, resulting in an indecipherable banter? Likewise, interruptions and interjections halt a potentially successful interview and conversation. It’s important for the spokesperson or onscreen talent to remain polite and in control to showcase poise and civility during a broadcast.

“Trump interrupted Wallace several times, which is always bad form, especially during a live interview,” Grabowski said. Also, several times Trump yelled for Press Secretary Kayleigh to bring him supporting evidence to answer a question. “That’s almost always a mistake, especially when it appears that you are trying to show up a reporter or that you’re overly dependent on your staff for information,” Grabowski added. “When you need information during an interview, you should let the journalist know you will obtain the material and provide it after the interview’s conclusion. If you must turn to an assistant for help, remain polite to the assistant and helpful to the reporter.”

Be mindful of physical appearance and environment. It was surprising the White House chose an outdoor venue during a heatwave for the interview, which may have been due to COVID guidelines. However, the heat cast a slick sheen upon the president, reminding some of the presidential debate of 1960, where many recall Nixon's obvious perspiration. Trump's physical posture, of leaning in and hunching over, also portrayed something of an aggressive nature, while Wallace sat up straight, leaned back and looked very much in control of the interview. With so many eyes watching, it’s always important for the subject to appear in their best light. As in Nixon's case, high-profile visuals, in the context of political controversy, can take generations to burn from memory.