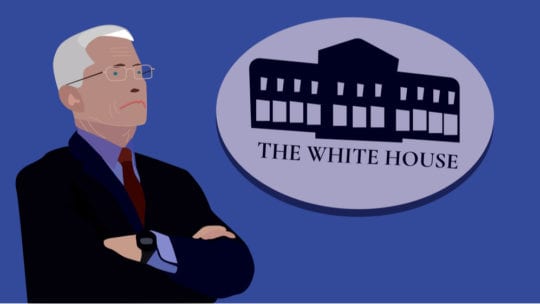 The White House turned up the gas on a campaign to discredit Dr. Anthony Fauci, director of the National Institute of Allergy and Infectious Diseases. The Washington Post published an article July 11 outlining ways the White House has silenced Fauci over the past several weeks. The report aired a statement from the Trump administration claiming "several White House officials are concerned about the number of times Dr. Fauci has been wrong on things," which, according to the Post, "included a lengthy list of the scientist’s comments from early in the outbreak."

What Led to the Smear

Trump appeared on Fox News with Sean Hannity July 9, responding that Fauci "is a nice man, but he’s made a lot of mistakes." According to The Washington Post, the White House followed up by cancelling three of Fauci’s scheduled interviews, with PBS NewsHour, a CNN town hall with Dr. Sanjay Gupta and NBC’s "Meet the Press."

In the midst of that media firestorm, the Financial Times released an interview with Dr. Fauci where he revealed that he has not seen President Trump in person since June 2, or briefed him in two months, even as cases surge around the country.

Why a Smear Campaign Will Not Work

Fauci takes the high road when it comes to PR, rarely firing back at opponents. While some may wish to silence him, Fauci showcases many of PR’s best practices.