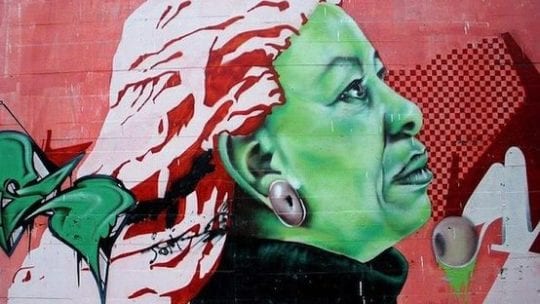 When writer, educator and humanitarian Toni Morrison died on Aug. 5 at age 88, she left behind a hallowed literary legacy that moved the world.

In his review of "The Source of Self-Regard," Morrison's collection of essays, speeches and mediations released in February, James McBride wrote:

"Toni Morrison does not belong to black America, She doesn’t belong to white America. She is not 'one of us.' She is all of us. She is not one nation. She is every nation. Her life is an instruction manual on how...to take an unknowing audience in the cradle of her hand and say, 'I love you…and you…and you…' To love someone. It’s the greatest democratic act imaginable. It’s the greatest novel ever written. Isn’t that why we read books in the first place?"

McBride isn't the first to remark upon the universality of Morrison's writing, but he sums it up quite well. As a teacher and professor emeritus at Princeton University, Morrison encouraged students to think about their writing with an equally wide lens for that "unknown audience," to write what they don't know and to imbue even peripheral characters with mindfulness and depth.

Below, some of Toni Morrison's most powerful quotes on storytelling.

Work with that which fascinates you

"I wrote the first book because I wanted to read it. I thought that kind of book, with that subject—those most vulnerable, most undescribed, not taken seriously little black girls—had never existed seriously in literature. No one had ever written about them except as props. Since I couldn’t find a book that did that, I thought, 'Well, I’ll write it and then I’ll read it.' It was really the reading impulse that got me into the writing thing.

In the context of this interview, Morrison recommends that aspiring storytellers write what they want to read. Extending that advice to communications yields several takeaways.

First and foremost, communicators should be their own expert source on the industries they work in. A communicator in the financial space should be aware of all federal regulations that affect their business, while someone in charge of influencer relations should be hip to the Federal Trade Commission's influencer guidelines.

That isn't to say that an academic or scientist can't beef up a story as an expert source, but rather that writing what you know also means knowing what you, your brand or agency represents within your industry.

Additionally, communicators should work on telling the stories that fascinate us. It's much easier to love working every day when your values and curiosity align with what you're working on. This is the path to a deeper relationship with the campaigns you champion, and most importantly, the stories you tell.

Be cognizant of what goes unsaid

I don’t trust a performance. I could get a response that might make me think it was successful when it wasn’t at all. The difficulty for me in writing...is to write language that can work quietly on a page for a reader who doesn’t hear anything. Now for that, one has to work very carefully with what is in between the words. What is not said. Which is measure, which is rhythm, and so on. So, it is what you don’t write that frequently gives what you do write its power.

Morrison's words on the inauthentic nature of a performance are worth noting: Putting anyone onstage or in front of a camera as spokesperson will always create an inherent level of distrust for your audience. We're conditioned to seeing talking heads and armchair academics opine on the political climate or unpack a brand crisis, but the cottage industry around media training suggests broadcast talking heads give just that—performances—which audiences seldom take at face value.

Instead, Morrison points out, it's what remains unsaid that often speaks the loudest. What language was deliberately avoided in your brand's latest crisis response, and why? What words are we conscious to omit from the national conversation around sensitive subjects? Critiques of performances during presidential debates, for example, often focus more on what a candidate hasn't said than what they have.

There's power in omission; wisdom is subtraction, and what we choose to leave out of the stories we tell often speaks louder than what we include.

"People say, I write for myself, and it sounds so awful and so narcissistic, but in a sense if you know how to read your own work—that is, with the necessary critical distance—it makes you a better writer and editor. When I teach creative writing, I always speak about how you have to learn how to read your work; I don’t mean enjoy it because you wrote it. I mean, go away from it, and read it as though it is the first time you’ve ever seen it. Critique it that way. Don’t get all involved in your thrilling sentences and all that..."

The greatest asset to your story is time—time to research, time to self-edit, and, most importantly, time to reread your work with a fresh set of eyes. Establishing distance between yourself and your work allows you to return to it with more clarity.

Morrison's warning not to get too "involved in your thrilling sentences and all that," should hit close to home for any communicator. The accelerated pace of this industry doesn't often allow for much time or distance between when we craft narratives and when those stories are shared with audiences.

There will always be time for a healthy dose of skepticism and self-critique around the language we craft. To Morrison's point, keeping ourselves from getting caught up in the stories we tell can go a long way in giving us that clarity of distance. It's only then that we reap the benefits of universal communication, allowing us to tell a story that connects with as many people as possible, ultimately bringing us closer together.