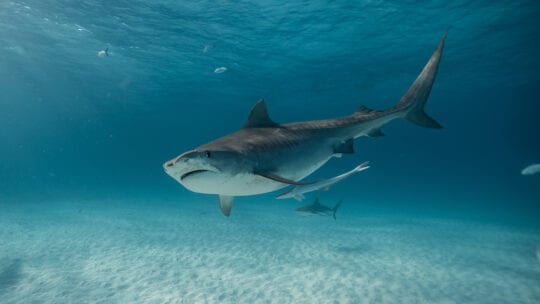 Next to the Super Bowl, Shark Week stands as one of the highly-anticipated American-made events.  As essential to the summer months as baseball and July 4th, fans eagerly await a week of specials and 7-days of non-stop shark programming on the Discovery network.

In its 32nd year, the long-running TV affair shows no signs of slowing. This year features programming with former boxing heavyweight Mike Tyson, former NBA player Shaquille O’Neal, and even a sing-a-long with the lovable Baby Shark.

Sharks should feel comfortable with the amount of PR power that 24-hours, 7-days a week programming offers. That’s more than any celebrity, politician or royal family member could want. As some say, any PR is good PR, right?

The question, though, is whether or not Shark Week is good or bad PR for sharks. Sure, there’s the lure (no pun intended) of danger and suspense, but also the opportunity for viewer education and earned respect for these majestic creatures.

Discovery Channel commits a large block of time to shark content for an entire week in August—something not many networks do for a specific genre. Sure, The Hallmark Channel celebrated Christmas in July with a 17-day, back-to-back holiday movie marathon. Sports networks like ESPN commit almost two-weeks to non-stop Super Bowl programming in February, but nothing raises awareness about a particular subject or animal like Shark Week.

In addition to ratings wins for Discovery, the programming aims to educate viewers about conservation, as well as inspire future Shark Week participants.

“The proof of the impact that Shark Week has had is that many, if not most, of the scientists and cinematographers we work with went into the field because they grew up watching Shark Week and fell in love with sharks,” said Laurie Goldberg, group EVP, PR, Discovery Channel and Science Channel.

“Anyone who watches Shark Week will see a constant conservation message—and we are very proud of that,” Goldberg added. “Our use of celebrities and experts also helps us bring the issue of the importance of sharks to more people and we love converting people’s fear into respect and enlist them to help.”

Naturalist and award-winning cinematographer Joe Romeiro has worked with Shark Week for close to a decade. His love for the ocean, and the English language, stemmed from watching these programs at an early age.

“It started as a kid,” Romeiro said. “I couldn’t speak English and learned from watching mostly monster movies and natural history films. Sharks were a big part of my favorites and through that I found my first ‘heroes.’ To this day, every time I see one it's like the first time.”

Romeiro’s work has appeared not only on Shark Week, but also in National Geographic, BBC Wildlife, Animal Planet, Good Morning America, CNN, FOX, and many more. He takes joy in spreading the word about sharks, and thinks Shark Week is needed, particularly this year.

“I think Shark Week does a great job helping spread awareness about the beauty and potential dangers and threats these animals (face while living) their daily lives,” Romeiro said. “They have a huge platform that so many people look forward to watching. I think this year, especially, we needed some summertime normality...and Shark Week helps audiences let go and enter the world of the sharks.”

“Many (shark) populations are in danger of extinction, and the more people understand sharks the better for conservation efforts,” he said. “I hope people enjoy the work we get to do all year round and appreciate these amazing animals the way we do.”

A Win for Conservation

“As divers, we are fortunate to witness how amazing sharks are—and how important they are to a healthy ocean, but not everyone has seen these fascinating creatures for themselves,” Valette-Wirth said. “By putting sharks in the spotlight, Shark Week, even if sometimes a bit over-sensationalized, gets millions of people around the world interested in, talking about and caring for sharks and the underwater world."

“Shark Week provides a great opportunity for scientists and conservation groups to share important information about issues impacting sharks—and how people everywhere can make a difference—at a time when people are most interested,” she said. “For divers, every week is Shark Week, but we, at PADI, take this as an opportunity to elevate awareness about shark protection and actions people can take to save the ocean.”

However, you can never please everyone. And while Shark Week provides a lot of advantages, some scientists and enthusiasts see it otherwise, as promoting a fearsome display of sharks.

I want to weigh in on #SharkWeek as both an early career elasmobranch scientist, and a resident of the island where Maine's 1st fatal shark attack JUST occurred. Shark week's fearmongering, pseudoscience and absolute nonsense programming is a net loss for sharks and people

Catherine Macdonald, Ph.D., is the co-founder and director of Field School, an interdisciplinary marine science training and education program, and teaches graduate-level courses in marine conservation biology. She wrote an opinion piece for Scientific American commenting on the lack of women or persons of color in leadership roles on Shark Week. Many of her fellow female scientists and researchers said they face a completely different reality than what Shark Week represented while they watched growing up.

“Shark Week’s choice of hosts and featured experts systematically enhances or upholds the authority of white male scientists while rarely incorporating the voices or featuring the work of women or people of color,” Macdonald wrote. “Those choices have real, meaningful effects on shark science, because appearing on Shark Week is a professional opportunity.”

The lack of gender diversity provides an opportunity for Shark Week programmers. Listening to digital feedback on social media channels, and articles such as these, can yield change—showing that yes, Shark Week really is for everyone.