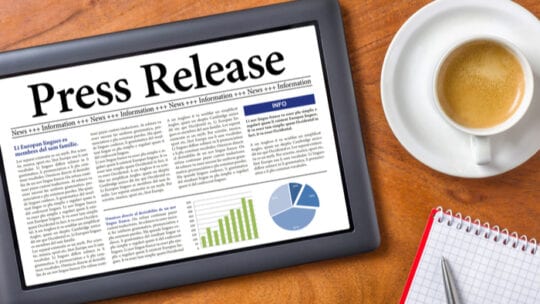 A great orator can really put the cherry on top of an important announcement or event. Former Apple CEO Steve Jobs, Former United States president Franklin D. Roosevelt and poet Maya Angelou all used their words to create historical references that will last a lifetime.

Unfortunately not every organization can boast of a true wordsmith. And that is where public relations professionals can really lend a hand. With so much content infiltrating journalists’ inboxes it can be difficult to create a memorable press release. Including an unforgettable quote can stop readers in their tracks, encouraging them to take a closer look at the story.

“The importance of a good quote in a press release cannot be understated – depending on the publication you’re sending it to, the quote might be the only portion of your release that's printed,” says Amy Lecza, senior manager, content marketing at G2.

PRNEWS looked into the best practices of delivering a good quote. Here are some of our top tips to help communicators elevate their executive sources.

Bold Statements: A provocative statement or prediction by a leader can entice the reader to learn more.
Example: “We believe it's the biggest advance in animation since Walt Disney started it all with the release of Snow White 50 years ago.”—Steve Jobs on Pixar’s “Toy Story.”

Discard Empty Statements: A sentence from a CEO or director saying they are happy about a new release or hire is not exactly newsworthy. Stick to important facts.
Example: “We are thrilled to become part of the Carrot Town family of stores,” said X CEO.

Use Authority: Always quote a company expert or authority when you can, instead of utilizing a “spokesperson.”
Example: “In our studies, the new electrolyte drink showed a 50 percent increase in energy among our 20 chosen athletes,” said Dr. Kelly Face, head of research at X Institute.

Ask Better Questions: Think like a reporter. If you want a better quote from your subject, ask better questions. Think on a human level. What are the most important things your audience needs to know?
Example: “We thought about our school reopening from our own parental perspective,” said Jane Doe, superintendent of Sunshine District Schools. “My daughter needs her daily lessons, but also her health.”

Avoid Buzzwords: Seeing industry jargon and cliches (paradigm shift, pivot, synergy) will cause many readers' eyes to glaze over, and particularly journalists who cover a specific industry. Quotes in real, conversational tone do well. And if you do use an acronym or jargon—be sure to define it. Not everyone lives in your world.
Example: Instead of ‘We chose to pivot to video,” President John X said, try using “Because of the 23 percent decline in organic search of our articles, we created a video strategy to entice new users,” President John X said.