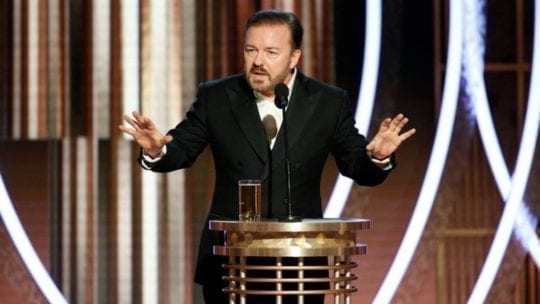 Ricky Gervais returned to host the 77th Annual Golden Globe Awards on Sunday, January 5th, 2020, marking his fifth and purportedly final time MC'ing Hollywood's star-studded celebration of the most prestigious film and television of 2019 (Gervais previously claimed that his hosting stint at the 2019 awards was his last, too).

Never one to hold back or play it safe, Gervais made clear from the beginning of his opening monologue that he did not care to play nice. "You all will be pleased to know that this is the last time I'm hosting these awards, so... I don't care anymore." he said. "I'm joking—I never did."

During the eight-minute monologue, Gervais proceeded to remind the well-heeled crowd what happens when a comedian considers nothing sacred—from mocking Felicity Huffman's recent jail time (saying that she made the license plate adorning his limousine) to criticizing Hollywood's hypocrisy at social activism while working with problematic tech titans like Apple, Amazon and Disney on streaming projects.

Embedded in Gervais' barbs, however, was far more than a subversive comedian taking jabs at a captive audience—but also a reminder that, in an election year, problematic business decisions from the top tiers of a brand will continue to leave a mark on the celebrities, and spokespeople, who are doing work on behalf of that brand.

It was the closing bit of Gervais' monologue that made the above clip trending number one on YouTube today, and made his name the top trend on Twitter as well. After pointing out that the marquee program on Apple's streaming service "The Morning Show" is about doing the good thing, Gervais called Apple hypocrites for creating work with a moral imperative while the company continues to operate "sweatshops in China."

"You say you're woke but the companies you work for...," Gervais continued to the star studded crowd, "...Apple, Amazon, Disney...if ISIS started a streaming service you'd call your agent, wouldn't you? If you do win an award tonight, don't use it as a platform to make a political speech..."

Before accepting the Cecil B DeMille lifetime achievement award later in the evening, Tom Hanks first trended for his reactions to Gervais' most confrontational lines, which made Hanks among the most-memed faces of the evening.

The only thing better than Ricky Gervais’ opening monologue was Tom Hanks’ reactions throughout it pic.twitter.com/XW6Er25Ghx

Largely respected as the face of decency in Hollywood, Hanks' reaction said much about how uncomfortable the room must have felt during Gervais' monologue. That's quite a shame, however, as it suggests that few in the room might have listened through the mean-spiritedness or laughs and actually taken his words to heart.

By evoking Apple, Disney and Amazon—big media companies who have all gotten in on the streaming service boom—Gervais suggested that any typical celebrity grandstanding about ideals or causes is rendered utterly hypocritical. After all, how can someone purport to campaign against human rights abuses when the company that writes their checks is intentionally perpetuating them? An earlier joke about Jefferey Epstein, wherein Gervais suggests that Epstein didn't kill himself and then—without missing a beat—responded to audience groans with this barb, further cementing his dedication to speak truth to power.

Ricky Gervais just made an Epstein didn't kill himself joke

The audience at the Golden Globes groaned

Ricky Gervais: "Shut up, I don't care. I know he was your friend."

Critics of the monologue said that many of Gervais' points have been cheapened by their advocates, however—particularly members of the far right on Twitter, for whom Gervais' media criticisms confirmed their longstanding, tinfoil hat-wearing beliefs about the complicity of "Hollywood Elite" types in exacerbating many of the world's problems.

Here's my Ricky Gervais problem: The idea that celebrities are not only pampered babies but hypocrites who cause the problems they make speeches deploring and should therefore shut up and act/sing/be grateful is a right-wing talking point, and an especially stupid one. >

In 2020, we are complicit to the sins of our employers

But here's the thing–whether or not Gervais' criticisms are more commonly ascribed to the right-wing or not in this country doesn't matter one bit. The media infrastructure is changing—streaming video and music services mean that more stars are attaching their names to projects funded by big tech. More creators, spokespeople and influencers create branded content with near-complete autonomy. Musicians and artists find themselves playing more festivals sponsored by large, often problematic organizations with values that contradict their own.

In each of these trends, those creators are complicit in the sins of their employers and parent companies—whether or not they knew anything about Amazon's reported worker abuses or Apple's labor practices abroad. As we head into an election year, those seeming hypocrisies will only be called out more and more. Actors, influencers, and spokespeople alike should account for the sins of the parent companies they are thinking about working with before signing any contract.

Artists can speak to their complicity, and share conflicting values, without compromising them

Believe it or not, the best response I've seen to artists understanding their complicity in a corporation's larger reputational issues has come from the music community. Two years ago, I reported on Coachella owner Phil Anschutz's AEG and his financial support of many anti-LGBT groups that run on agendas counter to the values of the progressive arts festival.

Today, a band with a name too blue to reprint here wrote a telling open letter explaining why they would be playing the 2020 edition of Coachella, despite the fact that AEG's values don't align with their own.

"What I do know is that the network of what AEG owns makes it close to impossible to do a mass boycott of all venues/festivals which are tied to him," wrote the band. "It seems like almost half the venues in the U.S. are owned by AEG or Live Nation – two major corporations that more or less run the music industry."

"We took time to discuss this decision, but ultimately decided that as a band who wants to share our music with the widest audience possible and as a band with women, POC, and queer members, we wanted to be represented and seen at a music festival of this level. We completely understand that some people will not agree with us, but it is something we are aware of and discussed prior."

This band's response is notable for a few reasons—for one, it calls out the fact that the band must work within an ecosystem largely controlled by companies with values that go against their own. They also discuss the pros and cons, openly and transparently, of operating within that ecosystem—not making an excuse for the decision to continue to work within it, but instead offering an explanation. The band feels that they can do more good, and have a bigger platform to share their values, when working within a problematic system rather than outside it.

That's a quandary I'm sure that many in attendance at last night's Golden Globes can relate to. The question then becomes, when an award winner makes a speech, will any of them be willing to talk about the struggle to have firm values while working under employers who don't?