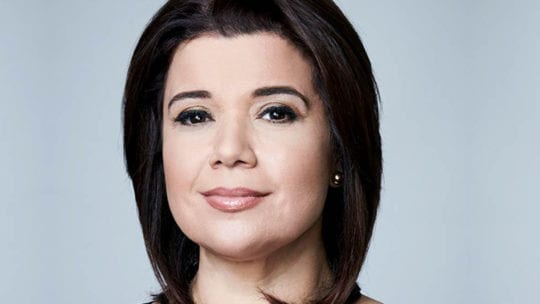 Political campaigns and PR efforts share characteristics. And with the onslaught of the 2020 US presidential election season, politics and PR can no longer avoid each other.

It was in this context that PRNEWS chose Ana Navarro, GOP strategist, co-host of ABC's “The View,” political contributor to CNN, Telemundo, and HBO's “Real Time with Bill Maher,” to deliver the day 2 keynote to its Crisis and Measurement Summit today (Feb. 26) in Miami. Not known for being a wallflower, Navarro addressed the political climate and how it relates to PR, as well as diversity and inclusion in messaging.

“A political campaign is a PR campaign,” Navarro told attendees. “You are trying to sell a product." Only half jokingly she said, "But [in politics, unlike PR] there is no warranty. And you can’t give the product back and get back your money if it doesn’t work.”

With the political divide growing, Navarro noted the passion people have for ideologies has caused breakups, ended friendships and broken up families. Politics, she said, is seeping into every aspect of life. Even J. Lo and Shakira's performance at the Super Bowl has become a political issue.

“Before, we used to be able to be on different political sides and still remain civil. The last 3.5 years something has been brought out in America, and I don’t know if you can put it back.”

Navarro spoke of brands such as Dick’s Sporting Goods and Walmart creating policies and taking  positions on the gun debate. It’s important for brands to communicate such messages owing to the infiltration of social media, which gives every consumer a voice, she said.

While Navarro isn't completely sanguine about social media, she credits it for helping mobilize America. “Look at the #MeToo campaign. (Social media) holds brands responsible. Would Bill O’Reilly have been fired from Fox if consumers hadn’t taken to social media calling on brands to remove advertising from his show? It’s a headache for PR pros, but at the same time it’s very American to be able to voice our feelings and opinions and follow it up with our pocketbook."

A Miami resident who immigrated in 1980 fleeing political turmoil in Nicaragua, Navarro is an advocate for immigration and inclusion.

“The inability of America to embrace diversity of thought is one of the biggest threats to society,” she said. “Too many of us want to surround ourselves with similar thinking," and we end up in an echo chamber. While she observed, "African Americans in South Carolina are very different from African Americans in New York," she believe speaking to different groups with different voices "does not work...[since] nothing is more important than authenticity. Listening to Michael Bloomberg trying to speak Spanish is comical.”

But Navarro noted that becoming a smaller world has resulted in cultural successes, because diversity is more accessible.

Haagen Dazs now makes dulce de leche ice cream, she said. “And Alexandria Ocasio-Cortez became such a lightning bolt for good and bad, that people have actually learned how to pronounce her name. Kids get inspired by a Sonia Sotamayor. Someone that has a name like them and looks like them. For so long we did not see that. Effective communication—having something that affects America and your consumer base—is always a good thing.”

The next generation grew up with social media. And it can work for good—such as the Parkland students from Stoneman Douglas High School—mobilizing more than one million people to march in support of gun control. But it also can work to spread scare tactics and trigger emotions.

Navarro reminded PR pros of how important their jobs are during these muddy times.

Navarro pointed out the innate ability of the younger generation to sniff out false affection from brands, especially during an election cycle.

“This generation has a nose for authenticity or being pandered to,” Navarro said. “Bloomberg is paying influencers and consultants to put out cool memes. Look, dude, no one is going to make you cool. You are rich, that’s your schtick. That’s ok. There’s no amount of money Bloomberg can pay influencers to make him look cool.”

Navarro encouraged practitioners to continue to have conviction and reminded them to keep promoting truth in messaging, especially with hackers and bots swarming social platforms and spouting falsities.