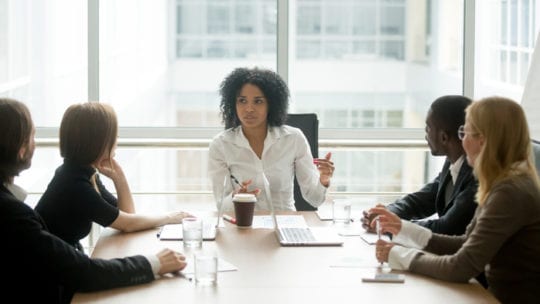 [Editor's Note: "Failure is the mother of success.” Thomas Edison tried thousands of light bulbs before he discovered his life-altering solution. Howard Schultz approached 242 investors with an idea for a chain of coffee shops. Nearly 220 of them refused the concept for Starbucks. It took Marie Curie years before she was able to isolate radium.

In this PRNEWS series, a partnership with the Institute for Public Relations, industry leaders share a difficult lesson. See the previous article in the series.

In this essay, SVP and CCO at Southwest Airlines Linda Rutherford discusses two lessons that helped her find the confidence to speak up in corporate settings.]

I was petrified and excited. After becoming leader of the communications and outreach department at Southwest Airlines, late in 2005, something unexpected happened.

I clammed up; I was absolutely terrified to speak up or share an opinion, and I was unwilling to enter a debate. Those who know me understand I’m not one to succumb to anxiety or feel overwhelmed easily. But two simple, little words—vice president—caused my shoulders to shoot up to about ear level and stay there. I was thrilled to be trusted with a leadership role. At the same time, I didn’t want anyone to realize the terrible mistake the company made in hiring me.

I felt like my feet were stuck in concrete and someone had stolen my tongue. Stepping into the boardroom weekly made me break into a cold sweat. Normally, I fancied myself a pretty good storyteller, but I spent weeks trying to overcome a sudden case of caveman-speak.

Stepping Up and Speaking Out

Over the next several months, multiple hard-fought lessons provided the insight I needed to step up to my new role.

I found a great, simple book: "Monday Morning Leadership," by David Cottrell. It’s a fable of a struggling manager and a mentor. The manager visits the mentor regularly to get advice and glean wisdom. One lesson involved understanding the difference between driver and passenger—as in, what is a passenger responsible for in a car, and what responsibilities does a driver have?

I realized I still had a foot in each camp: one in my old job as a member of the team and one in my new role as team leader.  It was important for me to make different decisions, set boundaries, be transparent and communicate them clearly. I spent weeks working out what needed to be different. At the same time, I started having really good conversations with my team and peers.

I’d been sitting in executive-level meetings for several months and I’d developed a habit. I'd whisper comments to the person seated next to me. “Why not think about doing such and such?” Or, “I don’t think they’ve considered such and such.”

One day, after a particularly long meeting, where I must have whispered a small novel to the person beside me, he took me aside. “You know," he said, "you had several interesting things to say. Too bad nobody heard them.”

That was an a-ha moment. I had to find my voice and share my valuable perspectives. I needed to find the courage.

Sometimes when we rise in an organization, we let the fear of not being enough stifle us. I learned—and smart people helped me realize—that I had something to offer. I needed to stop being afraid to speak up.