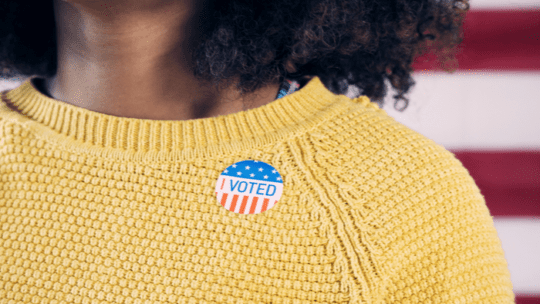 Georgia turned blue! That’s a statement I never dreamed I would utter. Born and raised in the South, I'm used to seeing redistricting, political power plays, fear-mongering and convenient alignment to religion distract from the needs of everyday people earning widespread wins for agendas not built to serve them. Don’t even get me started on how those tactics even entice people to vote in favor of their own systemic oppression.

How did Georgia's victories happen? How did a state that has only turned blue once in the last 30 years manage to help secure the presidential election, but control the Senate as well? What secured the improbable victories of both the first Black senator in Georgia and a young, promising millennial senator (the youngest ever to win), whose mentor was the late, great Rep. John Lewis?

Simple. It’s the strategic formula many of us have leveraged throughout our careers: Audience Targeting + Inspirational Messaging (with call to action) + Consistency (and saturation over multiple platforms) = Behavior Change. Of course, I’m simplifying the formula, but (IMHO) it’s the tie that binds this historic moment.

Over the last year, we’ve been inundated with ad on TV and social, text messaging and mainstream media pushing us to vote. In Georgia, it’s been the age-old battle of good versus evil. Us versus them.

Rather than focusing purely on fear when voting, the blue agenda delivered constant reminders that aligning to its platform meant greater access to healthcare, ending the pandemic, racial equity, law enforcement accountability, restoration of service-based leadership in politics, and most of all, faith.

Belief in something bigger and better. Believing in one’s power to make a difference. Messages of empowerment were targeted toward the Black community, a group that societal hardships have hit disproportionately. Many ads and social content featured Black people who hadn’t voted previously, sharing why this election and decision were critical to their lives.

Georgia turned blue because Black women and Black people heeded the call to shift our future and rallied together to make it happen. It was the Herculean effort of many, including warrior woman Stacey Abrams and her organization, Fair Fight, which was formed after the 2019 Georgia gubernatorial election in reaction to widespread voter suppression.

It was a faith-rich promise of the future, community engagement and powerful symbols of small-town heroes like Raphael Warnock. It was the energizing of our young people, the calls for healthcare reform and speaking power to pain from Jon Ossoff. It was the groundswell of support from community and member-based organizations like The Gathering Spot, lending their brand of advocacy to the fight. It was young Black men and women gifting personal stories of the power of their vote, and specifically, Black women taking the reigns of change pushing our community to the polls.

In the communication industry we often say “it's PR, not ER” to defuse misplaced emotion and urgency threaded within our efforts. In the case of this election, getting the message right was absolutely urgent and critically important. Telling the right story, to the right audience, on the right platforms over time garnered change, faith, the audacity of hope and impact.

History was made in Georgia. It’s amazing to view the genesis of systemic change and renewed faith in politics through the lens of communication.

The next time someone in your organization minimizes the importance of leveraging communication as the ultimate driver for business success, try referencing the case study of how Georgia Democrats, Black women and the Black community used the power of messaging to win the 2020 presidential election and senate runoffs. This is one victory the world won’t soon forget.